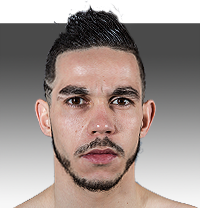 He started training at nine years old. He wanted to go boxing but his mother thought it was too violent and steered him into kickboxing instead. He was a natural, his talent quickly shone through.

He was also dedicated; at one time he lived hours from a team he was training with and would sometimes travel those hours each way in one day just to make a training session and get some work in.

Nowadays he is regarded as one of France's brightest talents and best prospects for future success, no small praise when one considers France's lineage in kickboxing and Muay Thai fighters.

Eddy has progressed from light contact as a youth through various levels of competition, into the full-contact crucible that GLORY Kickboxing represents.

He says he is here to prove that he is the best in the world and that he wants to fight the best featherweights on the planet, naming fighters such as Mosab Amrani, Gabriel Varga and Serhiy Adamchuk as being on his target list.