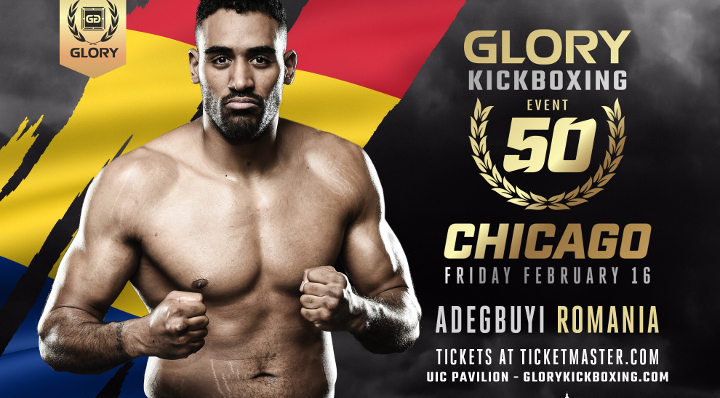 Anderson ‘Braddock’ Silva and Guto Inocente were both present at December’s GLORY REDEMPTION event, the former winning a fight with Brian Douwes, the latter cornering his countryman Alex Pereira.
Both heavyweights did backstage interviews after the event and in both interviews the same name came up: Benjamin Adegbuyi. Silva wants to avenge the GLORY 44 decision loss to the Romanian, Inocente (33-8, 17 KO’s) wants to prove his GLORY 43 win was neither a fluke nor a bad decision.
Adegbuyi (28-4-1, 16 KO’s) is currently in the Netherlands, training with Dennis Krauweel (Rico Verhoeven’s coach) for the upcoming GLORY 50 CHICAGO four-man heavyweight tournament. But he remembers his reaction when he watched those post-fight interviews while at home on his couch in Bucharest, Romania.
“I was like man, these guys are crazy!” he says, his voice rising in emphasis. “I watched their interviews and I was like what are these guys talking about? They are crazy.
“Guto has that win but it is not, in my opinion, a real win. Not only I say that, everyone says that to me. Not only do I not feel like I lost. The fight, I don’t even feel like it was a close fight! It was a really weird decision.”
Providentially, Inocente is part of next months GLORY 50 tournament. He’s in the opposite bracket to Adegbuyi, so if they are to meet it will be in the tournament final. That’s a scenario Adegbuyi is now strongly keen on.
“I hope we can meet in the final so I can get the revenge,” he says. “Backstage after that first fight I did my own interview and I said at the time I didn’t care about a rematch for revenge because really I didn’t feel like I had lost a fight.
“But then I heard Guto saying what he’s saying and now I’m like ‘OK man, you really think you got that win? Let’s see.’”
As for Silva (41-17-1, 26 KO’s), there’s no sign of his and Adegbuyi’s paths crossing again in the immediate future, but ‘Mr Gentleman’ is puzzled by the Brazilian’s insistence that the judges got it wrong in Chicago.
“It went to an extra round but in my opinion I won all three rounds clearly anyway. Then in the fourth I put him down for an eight count, so what is he talking about!?” he says.
In the meantime Adegbuyi has his next target in front of him: D’Angelo Marshall (17-2, 9 KO’s), a one-time Heavyweight Contender Tournament winner who is coming off a win over Ismael Londt in December.
“He’s young, he’s hungry - he reminds me of myself, actually, when I first came in to GLORY,” says Adegbuyi.  “I remember it like it was yesterday, coming to GLORY 14 ZAGREB in Croatia and wanting to show everyone that I am the next big thing. I get that same vibe from Marshall when I watch him.
“But.. I think he’s good, but not great. He’s not my level. Actually I don’t think anyone in this tournament is my level. I think you’ve got me and Rico clearly at the top of the heavyweight division and then the rest of guys are [some distance] below.”
Speaking of Verhoeven, the reigning heavyweight champion is doing some sparring with Adegbuyi to help him prepare for next month’s tournament. It’s a slightly odd situation, the division’s champion and #1 contender training together under the same coach, but it seems to work for everyone involved. For now, at least.
Adegbuyi always laughs when he’s asked what it’s like for the division’s main rivals to be training alongside each other. There’s a certain awkwardness to the situation, but it also seems that it really isn’t that big of a deal to all the people involved.
“Like I’ve said in the past, we don’t think right now about a fight with me and Rico. Only the fights we have in front of us right now. When that situation comes around, we will deal with it, we will sit down and work it out, but for now it’s not an issue,” he says.
“I’m planning to win everything I do this year. I made my pro boxing debut last year and I think I will do two or three more boxing fights this year, plus kickboxing. I’m trying to win everything. I have been the #1 contender for two years, my goal is to be champion and that goal hasn’t changed.
“The most obvious solution would be for me to change team for that fight, a different camp. Dennis has been with Rico for fifteen years, obviously I couldn’t expect him to train me for that fight. But for now everything is great. He’s a great coach, really intelligent, really helpful in all sorts of ways. This is a great team for me and this is going to be a good year for me.’
GLORY 50 CHICAGO takes place Friday, February 16 at the UIC Pavilion in Chicago, Illinois and features two world title fights: Murthel Groenhart defends the welterweight title against Harut Grigorian and Sitthichai defends the world lightweight title against Chris Baya.
To check your local listing for GLORY 50 Chicago, click here!