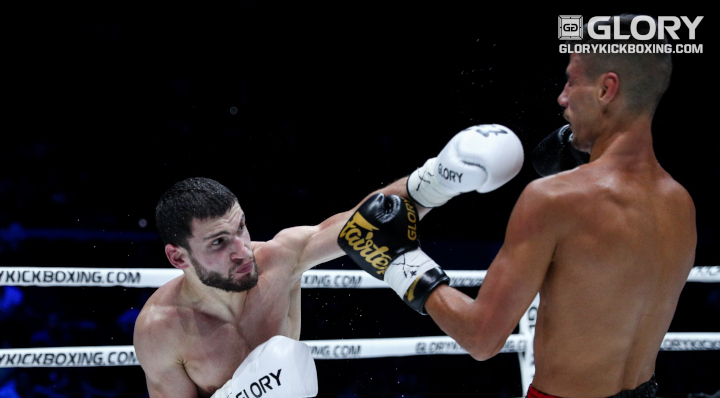 Lightweights Khaial Dzhaniev (38-4, 13 KO’s) of Russia made a successful GLORY debut, cruising past fellow newcomer Julio Lobo (41-11, 26 KO’s) of Brazil in the swing bout of the GLORY 57 main card.

The southpaw Dzhaniev closed the distance right away and began firing low kicks. Lobo used his length to re-establish the range. Dzhaniev worked the body of the Brazilian to get inside. Lobo delivered a right knee from close quarters, but Dzhaniev was undeterred.

The boxing of Dzhaniev was effective, as he was able to create angles and change levels with his punches.

Dzhaniev’s volume was evident early in round two, as landed with combinations. Lobo struggle to find a rhythm, as he was hit twice for every strike he threw.

A knee and right hand from Lobo found their marks midway through the frame, but Dzhaniev just smiled and kept firing punches. The punches of Dzhaniev continued to land as the round concluded.

Lobo pressured to open the final stanza. The step-in right knee from the Brazilian found a home, but Dzhaniev used his footwork to dampen the blow and circle away from the power.

The punches from the Russian were relentless, frequently snapping the head of Lobo with uppercuts at the end of three-punch combinations. The fighters swung until the final bell, but there was no doubt who would claim victory on the scorecards.

The judges all saw it the same, as Dzhaniev swept all three rounds on all five scorecards.