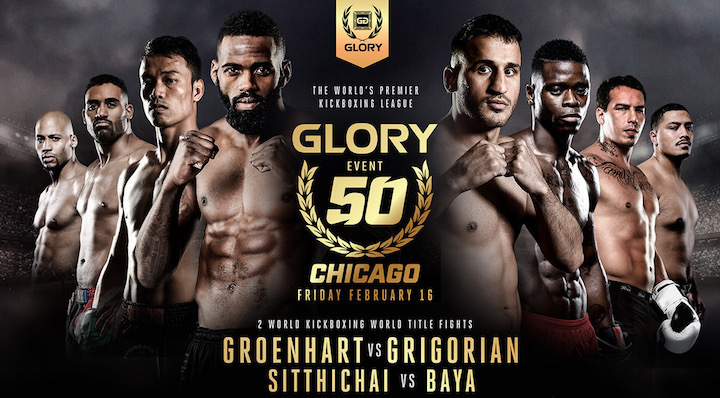 Murthel Groenhart (67-22-3, 38 KO’s) vs. Harut Grigorian (46-11, 32 KO’s)
Welterweight Championship Bout
Welterweight champion Murthel ‘The Predator’ Groenhart is from Amsterdam, Netherlands but has made Chicago into something of a second home. It’s been a scene of success for him twice before: he stopped ‘Thai Terminator’ Thongchai at GLORY 38 and he won the belt from Cedric Doumbe here at GLORY 44.
Grigorian is no stranger to The Windy City either: he won the Welterweight Contender Tournament at GLORY 44 to earn this title shot and go into what will be his third career fight with Groenhart. Their last encounter, at GLORY 42, ended in the single most controversial moment in GLORY history and that means this encounter has some heat in it.
If the revenge element wasn’t enough for Grigorian, it’s also his first GLORY title shot. For Groenhart it’s his first title defense, a crucial and highly-pressured bout for any new champion. Groenhart is 2-0 over Grigorian thus far, with his trademark knee strikes playing a key role on both occasions, but Grigorian’s battering-ram style nearly won him their first fight and will be in full effect in this one as well.
Being a title fight, it’s set for five rounds. But given the two fighters’ styles, plus the fact that both of their previous encounters ended inside the distance, there is a very high chance that the judges won’t be needed in this one either.
Richard Abraham (12-5, 4 KO’s) vs. Malik Watson-Smith (59-23,36 KO’s)
Welterweight Bout
Hometown hero Richard Abraham brings a huge crowd of vocal supporters with him whenever he fights in Chicago. At GLORY 50 he’s facing fellow Chicago native Malik Watson-Smith, so expect a big atmosphere. Thus far the Chicago arena has been Abraham’s house; Malik-Watson is looking to stage a home invasion and set himself up as the new Chicago landlord.
Abraham went 4-0 in his initial GLORY run before hitting a two-fight skid. He got back in the win column in his last fight and is now 5-2 in the organization overall. A win here doesn’t put him into immediate title contention but is an essential step towards that goal.
Watson-Smith is making his debut and brings a huge amount of experience with him. Most of that was garnered in Thailand, where he lived for six years. His style has a very traditional Muay Thai base, heavy on kicks, while Abraham is more of a puncher.
That sets the two up for a clash of styles and the outcome will depend who can take the other out of his comfort zone. Antoine Pinto succesfully outpointed Abraham with a kick-based game in their GLORY 38 encounter, but when Abraham is able to impose his preferred range, his hand work is a proven fight winner.
Heavyweight Contender Tournament:
Benjamin Adegbuyi (28-5, 16 KO’s) vs. D’Anglelo Marshall (17-2, 9 KO’s)
Guto Inocente (34-8, 17 KO’s) vs. Junior Tafa (18-1, 14 KO’s)
Anything can happen in a heavyweight encounter, but one outcome is a particularly consistent feature: knockouts. When the biggest fighters on the roster throw down, the end of the fight is always just one blow away.
Adegbuyi has three of his eight GLORY wins by stoppage and is the top-ranked fighter in this tournament. In the semi-finals he’s facing #3-ranked D’Angelo Marshall, who is 3-1 in GLORY with one of those wins inside the distance.
In the other bracket, Brazil’s Guto Inocente owns one of the most impressive knockouts in GLORY history, but has gone to decision five times since for a 5-1 GLORY record. He faces the 21-year-old Junior Tafa, who at 1-0 In GLORY, via a KO win in his debut last year, is technically running a 100% finish rate in the organization.
Realistically though he faces an uphill battle against the vastly more experienced Inocente, whose difficulty is also compounded by the unorthodox nature of his spin-kick centered style. Adegbuyi and Marshall should be a firefight for as long as it lasts, with Adegbuyi’s range and sharper boxing being a key advantage for him there.
Adegbuyi lost a controversial split-decision to Inocente at GLORY 43 NEW YORK and the two have traded some strong opinions in print ahead of this tournament. They are both keen to meet in the tournament final and make their respective points in a more forceful manner.
Whichever way the tournament pans out, expect three fun fights and a lot of heavy artillery.

Sitthichai (118-30-5, 32 KO’s) vs. Chris Baya (60-5-1, 35 KO’s)
Lightweight Championship Bout
‘The Killer Kid’ Sitthichai goes into his third defense of the lightweight title in the main event of the GLORY 50 SUPERFIGHT SERIES card.
He’s making his first appearance in the GLORY ring for almost a year. He spent much of 2017 taking showcase marquee fights in China, becoming a nationally-known figure there when he defeated the Shaolin monk Yi Long in November.
In his absence Chris Baya emerged as the top contender and now they are on collision course in Chicago. With a 7-1 record in the organization, and that loss being by way of highly controversial decision, Sitthichai has proven an unsolvable problem for his lightweight peers thus far.
Having trained as a professional literally since childhood - Thailand’s Muay Thai fighters are recruited in boyhood - he has an honed impeccable senses of distance and timing.
Baya, one of the hardest-hitting fighters in the division, needs to find or force a lapse in concentration which will allow him to land one of his staggering punches.
A technical fight at distance favors Sitthichai; Baya needs to make it into a brawl. But even then he has to be careful - Sitthichai’s knee strikes are notoriously effective, as TKO victims Dylan Salvador and Davit Kiria can attest.
Anthony McDonald (8-2, 6 KO’s) vs. Haze Wilson (24-3, 19 KO’s)
Heavyweight bout
Haze Wilson is a training partner of former UFC champion Frank Mir, so he’s no stranger to high-level competition. He is making his GLORY debut here against McDonald, an Army veteran with a 1-0 record in GLORY.
Both fighters are looking to prove that they deserve their spot on the roster and that should result in a fan-pleasing firefight.
With Wilson making his GLORY debut, McDonald has the advantage of having already made his debut in the sport’s premier league. But, as with any heavyweight fight, whoever is the first to land a clean blow can seal the result instantly.
Daniel Morales (1-4) vs. Omari Boyd (10-1, 1 KO)
Welterweight bout
Nashville’s Omari Boyd went 2-0 in GLORY, with one win by stoppage, before taking some time out after his May 2015 appearance. Now he’s back and looking to pick up where he left off, bringing with him the skills which won him national amateur championships in Muay Thai.
Here he’s facing Chicago’s own Daniel Morales, whose inspiring personal story includes transforming from gang member to martial artist and transitioning from being a fan in the bleachers (at GLORY 11 CHICAGO) to a five-fight veteran of the organization.
Morales’ force of personality and local following carried him to the GLORY ring and this will be his fourth fight in his home city of Chicago. But at 1-4 in GLORY it’s been a very steep learning curve for ‘La Maquina’ and Boyd is another difficult opponent. This is a fight he cannot afford to lose.
Omar Moreno  (26-7-1, 9 KO’s) vs. Casey Greene 5-7 (2 KO’s)
Welterweight Bout
Moreno lives in the Netherlands and made his debut at GLORY REDEMPTION in Rotterdam this past December with an accomplished performance. His unique personal background - born in Chicago to a European father and Mexican mother - made him a perfect fit for this card, hence his expeditious return to action.
Opposite him is Casey Greene, a seven-fight GLORY veteran with a 3-4 record in the organization. Greene, a former middleweight, has stopping power but has also been stopped twice in GLORY and is riding back-to-back losses into this fight.
Moreno showcased power and technical ability in his GLORY debut. He has also learned his craft on the European circuit, which generally provides a harder level of competition than its US carpet. Despite Greene being the GLORY veteran here, the advantage may well lie with Moreno.
Diego Llamas (10-3, 8 KO’s) vs Juston Houghton (9-5, 3 KO’s)
Catchweight Bout (150 lbs / 68 kg)
Opening the Superfight Series card is a bout which was moved up from the undercard when a previously scheduled heavyweight fight was cancelled due to Catalin Morosanu needing to undergo surgery for a hernia.
Houghton trains under Duane Ludwig in Denver, Colorado. He has made a habit of stepping up on short notice for GLORY fights and that may be a factor in his still needing to find form in the organization. He is 1-2 from three appearances.
Llamas fights under the Mexican flag but for three years has been based in Dublin, California. He moved there, despite speaking no English, after encountering a Combat Sports Academy fighter in Mexico and being so impressed with the team that he wanted to train with them.
He has fought on some good platforms - Lion Fight under Muay Thai rules, Tachi Palace Fights as an MMA fighter - and is very dedicated, working in the early hours of the morning before undertaking the first of two daily training sessions.
This fight is actually a rematch: he and Houghton fought under Muay Thai rules in 2015, with Llamas coming away with the decision.