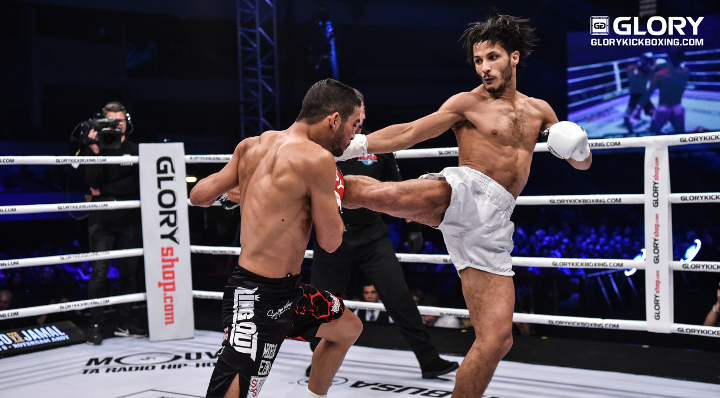 Azize Hlali (99-16-1) has a tough challenge ahead of him in the GLORY 53 LILLE Featherweight Contender Tournament.
Not only are GLORY four-man tournaments some of the toughest tests in all of the sporting world, he also has former world champion Serhii Adamchuk (35-8) in the semi-final stage.
The tricky Ukrainian went 5-0 in GLORY before suffering back-to-back losses to former champion Gabriel Varga and dangerous karateka Giga Chikadze).
He’s now 2-2 in his last four GLORY outings, with the losses being to current champion Robin van Roosmalen and top contneder Petchpanomrung.
Adamchuk’s only losses are to top-flight opposition and thus this semi-final match is as much about Hlali’s place in the pecking order as it is about the tournament outcome itself.
“He’s a very good fighter and I am not really focusing on his latest results. You can’t read anything into that. A weakness that somebody found previously does not mean that fighter won’t be a force today,” he says.
“The strategy is simple: to win. And I must adapt my Muay Thai style for these rules.”
Fitness is also a key part of Hlali’s arsenal for this tournament.
“It’s important to be in very good shape for a tournament. Generally I prefer not to fight in tournaments because I prefer to be able to plan a strategy for a single opponent,” he says.
“Tournaments are more difficult because it requires double the effort on every level: mental and physical. But I will make sure I am in shape for this challenge.”
The other semi-final bracket has Victor ‘Leo’ Pinto facing Turkish newcomer Buray Bozaryilmaz.
Hlali doesn’t have a prediction for the outcome but, as he expects to face the winner, he does know one thing: “I hope that fight is a complete war and it goes all three rounds!”
GLORY 53 LILLE takes place Saturday, May 12 at the Zenith de Lille, in Lille, France.
The headline bout sees lightweight champion Sitthichai defend his title against Dutch-Moroccan challenger Tyjani ‘The Wonderboy’ Beztati.