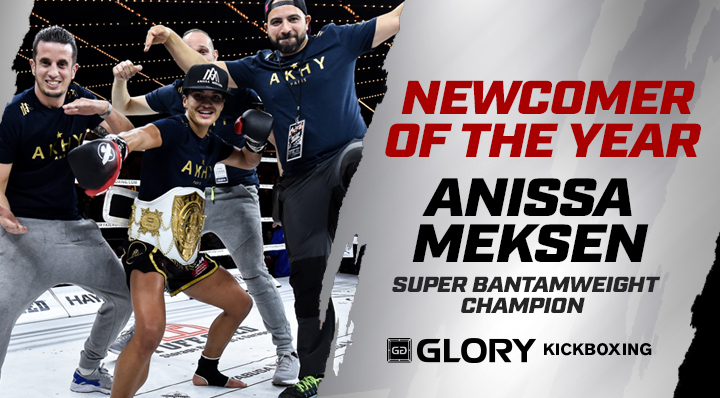 Anissa Meksen has been voted the GLORY Newcomer of the Year 2017.
Fans around the world cast their votes online in the first weeks of the New Year and Meksen won by a landslide.
The French fighter started the year as a GLORY rookie but by the end of it was 3-0 in the organization and the new women’s super-bantamweight champion after taking a unanimous decision win over Tiffany van Soest in at GLORY 48 NEW YORK.
She collected 68% of the vote in this category, the largest winning margin of any winner in any category this year.
Also nominated:
Alim Nabiyev, who won his debut at GLORY 47 and then immediately called out former welterweight champion Nieky Holzken. They fought at GLORY 49 and Nabiyev dominated the fight to immediately mark himself out as a new contender in the weight class.
GLORY went to China for the first time in 2017. Chenglong Zhang is one of several Chinese fighters who made their debuts this year. He stood out by winning a tournament, a fight of the night award and going 3-1 for the year overall.
And finally, the heavyweight division got a new prospect in 2017 when D'Angelo Marshall joined the ranks. He has climbed the rankings at a rapid pace after winning a four-man tournament in the summer and beat the highly regarded Ismael Londt in December