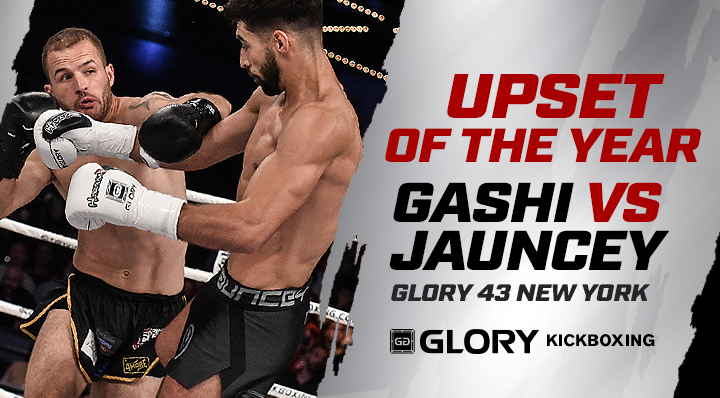 Anything can happen in a fight and at this level the upset is always there for the taking, even when one fighter is the underdog by a considerable margin.
But the standout act of giant-killing in 2017 was, for most GLORY fans, Elvis Gashi’s stoppage of Josh Jauncey at GLORY 43 NEW YORK.
Gashi is originally from Kosovo but has been resident in The Bronx, New York, for many years. He was brought in as a local ‘wild card’ entrant to face Jauncey and was not tipped to win - except by those who knew him well.
It turned out they were right. GLORY veteran Jauncey has faced some of the biggest names in the sport but few of them with hands as heavy as Gashi’s. Once he found his mark, the tide of the fight quickly turned in his favor.
The end came in the second round, following three successive knockdowns. Under GLORY rules that is a TKO and so Elvis found himself leaving the building early in his GLORY debut. He won a second fight later in the year and is now 2-0 in the organization.
Also nominated:
Alim Nabiyev, for his win over former welterweight champion Nieky Holzken at GLORY 49
Massaro Glunder, for stopping Niclas Larsen at GLORY 42 after stepping in on just three days’ notice
Anvar Boynazarov, for pulling off an incredible knockout win over Fabio Pinca despite being on the losing side of the fight up until that point.