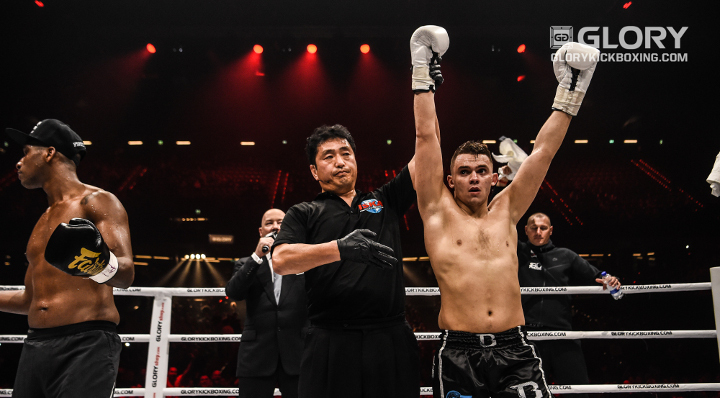 With his Dutch-Moroccan background and power-punching fighting style, Mohammed Jaraya (64-6, 36 KO’s) is frequently compared to Badr Hari.
His brooding entrance to the ring for his GLORY 51 fight with Miles Simson (64-13, 25 KO’s) only strengthened those comparisons, Jaraya radiating dark energy as he stalked his way slowly down the catwalk, eyeballing Simson the whole time.
Jaraya’s signing with GLORY got a lot of attention from his large fanbase in the Netherlands and there were a lot of eyes on him for this debut. His destructive fighting style is a crowd-pleaser and the move up to welterweight brought with it the possibility of an increase in power.
That increase in power applied both ways though: Simson has fought most of his career at welterweight and had a clear height and reach advantage over Jaraya. He isn’t as well known as Jaraya but he is experienced. All the expectation lay on Jaraya; Simson was trying to spoil the party.
Jaraya’s fighting style is all-out aggression and he is happy to take a shot if he can land one of his own, so the fight quickly got into full flow once the bell sounded at the start of the first round.
The exchanges were constant, Jaraya hammering away with power shots to the body and head while Simson chipped away at him with flurries in return. Jaraya generally landed the harder shots, several times with visible effect, while Simson had more volume and did a lot of good clean work with the jab.
It was a grinder of a fight for both participants. They hit each other with every shot in the playbook: punches, kicks, knees, low kick after low kick thudding into their legs constantly. Neither gave the slightest thought to playing it safe at any moment.
Jaraya stepped up his head-hunting in the third round, going for broke with huge punches which Simson did a good job of slipping. But when Simson didn’t manage to get out of the way, he found himself on the receiving end of some thudding blows.
After three rounds things were close; the statistics showed Simson landing the greater volume but Jaraya having landed the majority of the power shots. Under GLORY scoring criteria, damage outweighs volume, and so the judges were unanimous in awarding Jaraya the victory.
Mohammed Jaraya def. Miles Simson (29-28, 29-28, 29-28, 30-27, 30-27