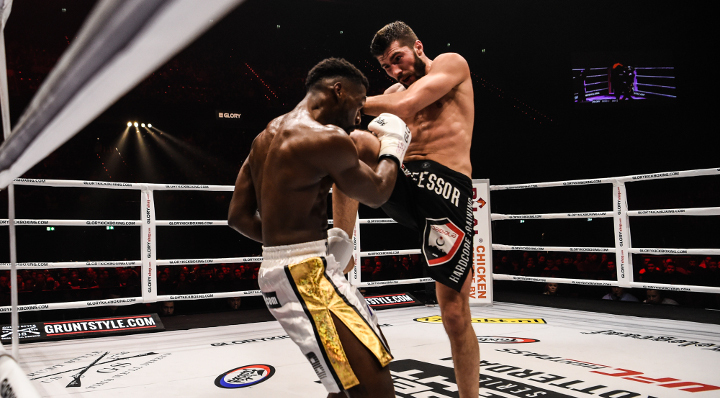 With back-to-back wins over former welterweight champions, Alim Nabiyev (49-6, 21 KO’s) has now secured himself a title shot.
He took a unanimous decision win over former champion Cedric Doumbé (68-6-1, 39 KO’s) in the main event of the GLORY 51 ROTTERDAM Superfight Series card, outfoxing his French rival over three rounds.
Both Doumbé and Nabiyev have unorthodox styles which involve a lot of showboating and taunting of the opponent. But Doumbé objected to Nabiyev being desc
This prompted comments that they have “similar” styles, but Doumbé objected to that, saying that his antics are all distractions used to evade blows or land his own, whereas Nabiyev’s are just horseplay for the crowd.
“He is a clown, a dancing clown,” is how Doumbé put it, somewhat ironic given since Nieky Holzken had same almost exactly the same about him prior to their second fight.
Unfortunately for Doumbé, he had to watch the clown become a prince. Doumbé is usually able to trick and misdirect his opponents into opening their defenses, or rile them into coming forward in an angry, sloppy way.
None of that worked on Nabiyev. Instead, Nabiyev gave Doumbé a taste of his own medicine. His superior height and reach meant he was able to stay out of trouble while at that same time giving Doumbé problems.
Doumbé took more cleanest hits in this fight than in any of his previous GLORY fights. In the third round he was also in the most trouble he has ever been in, in the GLORY ring, as Nabiyev caught him with a jumping knee which visibly rocked him.
Nabiyev claimed in his post-fight interview that he would have finished Doumbé had the fight gone to a fourth round.
That will forever remain open to debate. At the conclusion of the three allotted rounds the momentum was with Nabiyev but both fighters raised their hands to claim victory when the final bell sounded.
Two of the judges agreed with Doumbé, the other three with Nabiyev. Even though he got the win, Nabiyev seemed more than a little nonplussed that it was a split-decision rather than a unanimous decision.
Still, a win is a win. He now moves forward to a welterweight title shot against Harut Grigorian, who won the belt earlier this month with a stoppage win over Murthel Groenhart. The welterweight war zone remains as active as ever.
Alim Nabiyev def Cedric Doumbe via split decision (29-28, 29-28, 29-28, 29-28, 28-29)