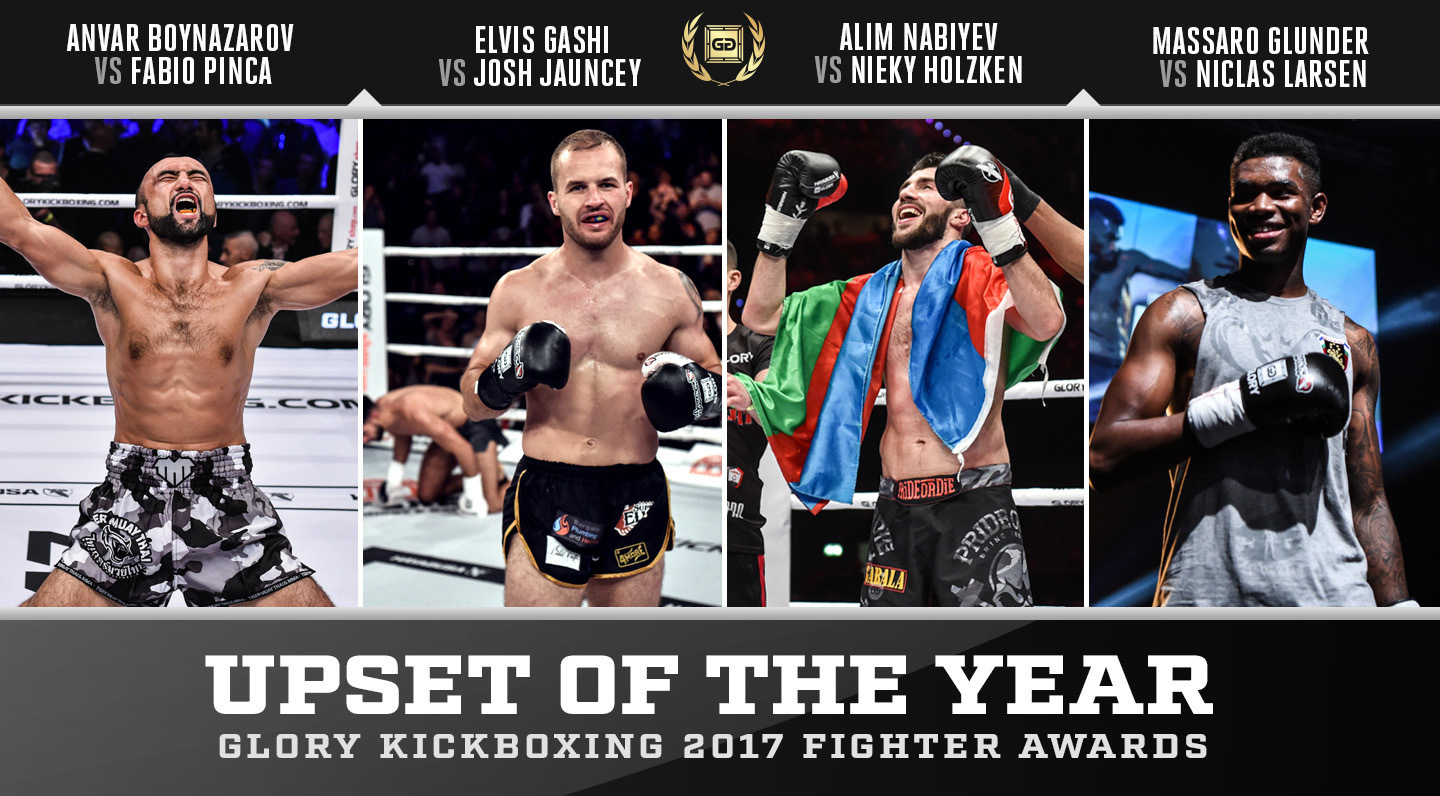 Nominations: GLORY Upset of the Year 2017

There’s a reason that the golden rule of gambling is only to bet an amount of money you are prepared to lose: it’s because there are no guarantees in sport.

That’s especially true of the fight game, where one well-placed shot can change everything, or an unknown quantity can enter the ring and reveal themselves to be an instant force.

Four of the biggest upsets which took place in the GLORY ring in 2017 are shortlisted below, but which one is the ‘Upset of the Year 2017’?

Nabiyev signed with GLORY at the midpoint of 2017 and immediately started calling out former welterweight champion Nieky Holzken.

It was a very bold move; Holzken warned Nabiyev to “be careful what you wish for” and plenty of fans thought Nabiyev was over-reaching himself.

But at GLORY 49 he put on a showcase performance to take a clear-cut unanimous decision over ‘The Natural’ and immediately insert himself into the welterweight contender conversation.

Amsterdam-based featherweight Massaro Glunder was in Paris to support his team mate Chris Baya, who was competing in the GLORY 42 Lightweight Contender Tournament.

Three days out from fight night, Niclas Larsen found himself without an opponent for the tournament semi-finals. Glunder said he would take the fight, because he wouldn’t need to cut any weight to make the lightweight limit.

On paper Glunder didn’t have much of a chance against tournament favorite Larsen. But he’s tough, so it could have been reasonably expected he would last the distance. He didn’t: he stopped the fight in the first round by scoring two knockdowns against the Dane and eliminating him from the tournament.

Born in Kosovo, Elvis Gashi and his family relocated to Belgium because of the Balkans War. He trained in kickboxing from a young age and in 2012 was able to relocate to New York after visiting as part of a Kosovan National Team tour.

Fighting out of The Bronx, Gashi joined the New York line-up as a local wild card. For an opponent he drew the Top Ten-ranked Josh Jauncey. It was a tall order, but Gashi’s life has been a series of challenges and this was just one more.

Jauncey found himself under a barrage from one of the hardest-hitting opponents he has yet faced in his career. Gashi’s bombs began finding their mark in the second round: he knocked Jauncey down three times to score a KO win at 2:59.

Boynazarov actually lives in Thailand but it is Pinca who is by far the most accomplished of the two in that sport. Based on their career records, in which Pinca had also never been knocked down, Boynazarov was the underdog by quite some margin.

That status held true for much of the fight as Pinca put on a masterclass of timing, distance and misdirection. But in the second round when he leapt into a flamboyant kick attempt Boynazarov read his intentions and met him with a crunching left hook which had Pinca pivot horizontally in mid-air and come crashing to the canvas, out cold.