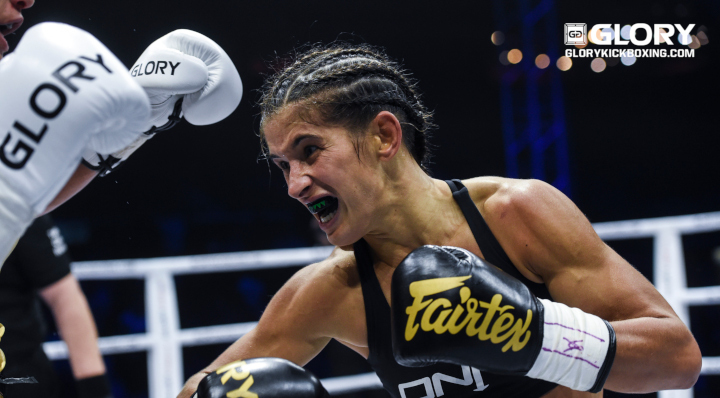 The heat is on GLORY super-bantamweight champion Anissa Meksen.

Not only does she have Swedish standout Sofia Olofsson challenging her at GLORY 66 later this month, she also has two former champions facing off at GLORY 67 ORLANDO with a view to the winner taking a shot at the belt.

Tiffany van Soest (19-4-1, 6 KO's) was the first female champion GLORY history, making her way through an eight-woman Grand Prix and beating the previously-undefeated Amel Dehby to take possession of the belt in what was the division’s inaugural title fight at GLORY 36.

A successful defense followed, before a GLORY 48 encounter with Meksen. After five close rounds Meksen came away with a split-decision win and the world title belt.

Some debate attached to the result - as it does with all decisions - but it had nothing of the controversy which surrounded Meksen’s GLORY 56 fight with Jady Menezes (13-3, 5 KO's).

Despite apparently dominating the majority of the fight, Meksen found herself on the losing end of the most controversial decision in GLORY history.

An immediate rematch was ordered. It took place at GLORY 61 in New York and this time Meksen left nothing to chance, stopping Menezes in the second round and reclaiming possession of the belt.

At GLORY 64 Meksen defended the title against Van Soest and again came away the winner by split-decision.

For Van Soest it is two split-decisions too many. She is still looking for the definitive contest with Meksen.

For Menezes, the controversy of the win over Meksen was a mystery to her, while the subsequent TKO loss was a surprise. She wants the belt back but, perhaps even more so, she wants to give Meksen the same treatment she received from the Frenchwoman in New York.

For both, winning in Orlando is an essential step in arranging that next meeting with Meksen - or, if Olofsson wins in Paris, being the Swede’s first title challenger.