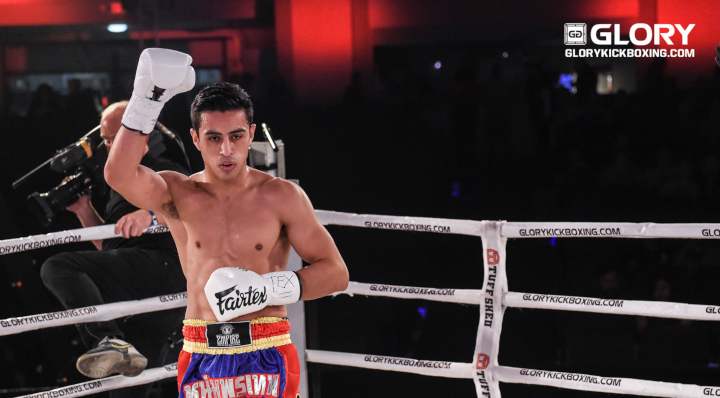 Undefeated Abraham Vidales (13-0, 11 KO’s) will put his perfect professional record on the line in Orlando, Florida once again next month as he faces the forward-pressure fighter Trevor Ragin (7-5) on the GLORY 67 SUPERFIGHT SERIES card.

Vidales (pictured), fighting out of Monterrey, Mexico, has scored 85% of his wins inside the distance and has a reputation as a ferocious body-puncher.

He has ended both of his GLORY fights to date by TKO in the first and second rounds respectively and now looks for one more in Orlando.

Ragin, of Richmond, Virginia, appeared on a GLORY undercard in his home state several years ago and immediately caught attention with his recklessly aggressive fighting style.

He subsequently got a call-up to the GLORY ranks but came in as a lightweight and found himself undersized by the likes of Israeli contender Itay Gershon. He has now dropped down a weight class and looks to continue his campaign at featherweight.

South African lightweight Lorawnt-t ‘Smash’ Nelson (7-1, 3 KO’s) lives up to his nickname and has gone 2-1 in his trio of GLORY fights thus far.

Opposite him in Orlando will be Nick ‘The Golden Boy’ Chasteen (9-4). Fighting out of Phoenix, Arizona, Chasteen is 1-1 in GLORY and coming off a dominating win at GLORY 58.

Also in the lightweight division is the clash between Peter Stanonik (6-0, 3 KO’s) and Florida’s own Vince McGuinness (1-2, 1 KO).

McGuinness, fighting out of Tampa, FL, has yet to find form in his brace of GLORY outings to date and looks to snap a two-fight win streak when he steps into the ring to defend home soil against the Texan interloper next month.