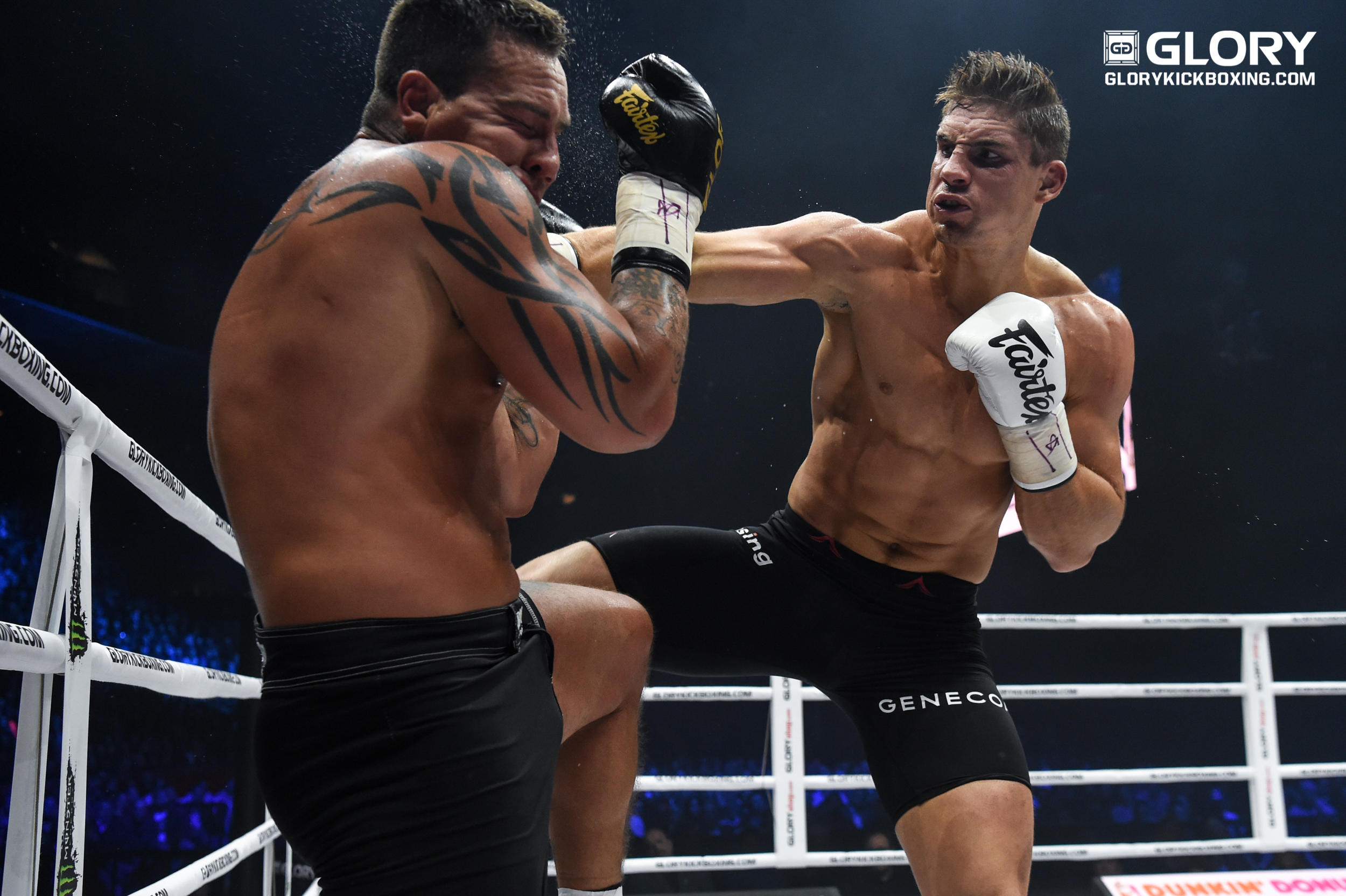 GLORY Kickboxing’s first visit to the Johan Cruijff Arena in Amsterdam — the home of the Ajax football club — for its 59th event was headlined by the world’s best heavyweight, Rico Verhoeven (55-10, 16 KO’s).

The Dutchman was putting his belt on the line for the eighth time, this time against Brazilian challenger Guto Inocente (35-9, 17 KO’s).

The champion Verhoeven closed the distance to avoid the kicking arsenal of the Brazilian.

Inocente looked for a spinning backfist, which Verhoeven avoided. Verhoeven scored with low kicks as he pressed the action. The challenger kept firing off spinning attacks with little success.

A right kick to right hand combination from Verhoeven forced Inocente to back up along the ropes. Verhoeven was relentless with his low kicks, countering every strike attempt from the challenger.

Inocente tried to open up and brawl in the third, but Verhoeven had none of it. He easily evaded the looping punches and returned with more kicks.

Verhoeven popped the head of Inocente with a jab, prompting the crowd to erupt. Inocente started breathing much heavier as the round came to a close.

There was a sense of desperation from Inocente in round four. He looked for a wild spinning attack that Verhoeven avoided. The Brazilian then went for an illegal sweep, dumping Verhoeven on his head.

The referee gave a stern warning and Verhoeven just glared at the challenger. A heavy knee from Verhoeven landed and he followed it with a head kick.

The champion increased his punching output as well, as blood poured from Inocente’s nose.

The fifth round saw Verhoeven stay in boxing range, preventing Inocente from having space for his kicks.

The Brazilian was visibly tired from the litany of strikes absorbed. The Dutch crowd began chanting, “Rico! Rico!” Inocente delivered an uppercut that was answered by a left head kick from Verhoeven. The fight went the distance, but there was no doubt who had won.

“It was okay. There is always room for improvement,” said Verhoeven in victory.

Addressing the crowd, Verhoeven opened up, “The feeling that is going through my f*cking body right now is amazing. You guys came out for us tonight. I hope you enjoyed yourself. If we can all come out and enjoy sports together, all races, we can live together, we can love together.”