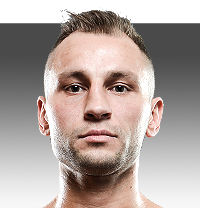 No titles and achievements

Andrej Bruhl was born and raised in Russia but for many years has resided in Germany, pursuing his twin goals of reaching the top in kickboxing and professional boxing.

Consistently ranked in the world's top twenty at his weight, Bruhl has fought in numerous major organizations all over the planet, including GLORY, K-1 and WBC-sanctioned bouts.

His debut for GLORY came in the GLORY 8 TOKYO Featherweight Tournament, which featured the world's top eight featherweights.

Bruhl fought in the tournament reserve bout and won, which meant he was on standby to be drafted in if any fighter was too injured to progress to the next round.

As it turned out, he was not needed, but the tournament was still good experience for him. “It just motivates me to train harder and better,” he remarked afterwards.