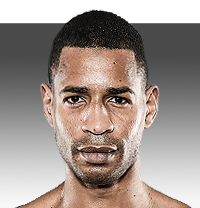 Fighting out of Temecula, California and representing Team Quest, much of Edward Hyman’s training is done at Dan Henderson’s Athletic Fitness Center alongside the former PRIDE FC and STRIKEFORCE champion Dan ‘Hendo’ Henderson.

Hyman was born on Staten Island, New York but relocated to California at the age of 12 when his mother moved the family out west in search of a better quality of life. He has been kickboxing since 2008 and also competes in MMA.

He joined Team Quest in 2013 and numbers the likes of Thierry Sokoudjou and UFC middleweight Sam Alvey among his training partners, under the striking tutelage of ‘Striking’ GokhanYizlidi, a Dutch-style kickboxing coach who relocated from his native Belgium to Temecula, CA and now coaches many Team Quest fighters.

Hyman’s style represents his coaches’ heritage, being a Dutch-style approach which favors hand combinations, hard low kicks and a constant search for the finish.