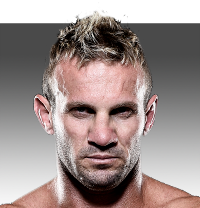 Nathan 'Carnage' Corbett is the undisputed best light-heavyweight in Australia and one of the top fighters in the world at this weight. Fighting out of the Gold Coast, Australia, he is a ten-time world champion in Muay Thai.

His nickname is no accident. Corbett is a finish-fighter who is always looking to put his opponents away. He has a high knockout ratio, with more than three quarters of his wins coming inside the distance.

Corbett's first steps into the martial arts were via karate in his younger years. While he is now a Muay Thai stylist, he does think that there are certain elements of his early karate training that have influenced his overall fighting style and his philosophy on approaching opponents.

"For example, I don't have a defensive push-kick like a lot of Thai fighters do," he says. "In karate, it's all about what's going to do the most damage. If the push-kick wasn't going to do maximum damage, then I had no use for it".

He is also noted for his excellent conditioning, his team having been early adopters of sport-science and cutting-edge training techniques. His peak fitness, fighting intelligence and high aggression are the ingredients which have made him a decorated world champion.