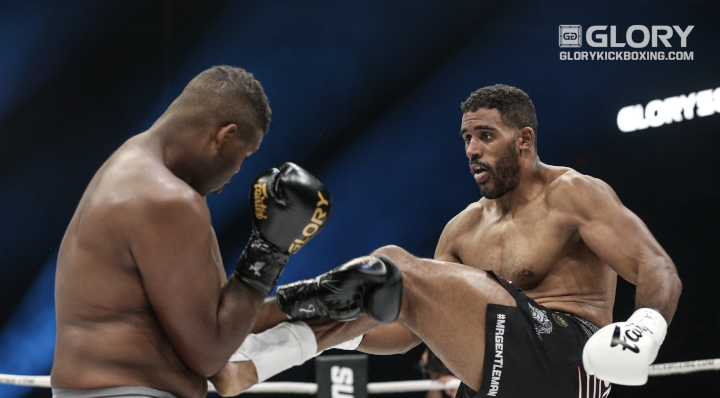 Adegbuyi: “Ben Saddik in the GLORY 62 Heavyweight Grand Prix final is definitely a fight I want"

“Eight-man tournaments are really beautiful I think, because anything can happen,” says Benjamin Adegbuyi of the upcoming GLORY 62 Heavyweight Grand Prix.
“They are a test of everything: skill, fitness, endurance. But also your fortune: do you get unlucky and pick up and injury early or do you get lucky and keep winning with quick knockouts?”
Adegbuyi has established himself as beyond doubt the king of the four-man heavyweight tournament in GLORY, having won three of them, but this will be his first time competing in an eight-man.
Given that he is #1 in the heavyweight contender listings, it is no surprise that Adegbuyi is top seed in this tournament and the favorite to win it.
Second-favorite is Jamal Ben Saddik: despite both of them having prolonged tenure on the GLORY roster, they have not yet fought.
They are on opposite sides of the Rotterdam tournament line up so if they do meet, if it will be in the tournament final.
“That would be interesting for me because he’s basically the only tough heavyweight in GLORY that I didn’t fight yet. I fought Jahfarr Wilnis, Junior Tafa, Guto Inocente…
“But it depends who he gets on his side of the tournament. I don’t want to be disrespectful, but for me he’s not yet shown that he has a big heart.
“If he gets Jahfarr and another tough guy maybe he doesn’t make it to the final.
“At the same time, he is unpredictable - he can finish his fights in one minute each and arrive fresh in the final. So it’s hard to say. But definitely I am interested in that fight.”
The GLORY 62 ROTTERDAM 8-Man Heavyweight Grand Prix takes place Saturday, December 8 at the Ahoy Arena in Rotterdam, Netherlands.
On the line is a $100,000 grand prize for the tournament winner and $30,000 for the runner-up, in addition to their standard fight purses. Fighters who reach the semi-finals receive an additional $10,000 bonus.