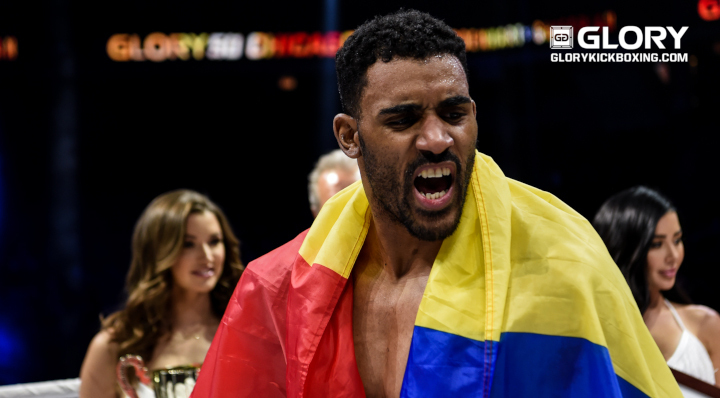 Adegbuyi: “Nobody is taking the top contender spot from me"

If you’re trying to take Benjamin Adegbuyi’s place, you’ve got another thing coming.
That’s the message from #1 ranked heavyweight Adegbuyi ahead of this coming weekend’s GLORY 62 ROTTERDAM 8-Man Heavyweight Grand Prix.
Adegbuyi enters as the top seed thanks to his leading place in the contender lists. Other participants include the #2 ranked Jamal Ben Saddik and the #3 ranked Guto Inocente.
“I’m the #1 contender and the favorite. That gives me motivation, but also extra things to think about and to prove,” he says.
“This is one of the biggest fights in my career. GLORY is the biggest organization, this is the [biggest] tournament. It’s about prize money, fame - everything!”
With world heavyweight champion Rico Verhoeven dominating the division, Adegbuyi has found himself in the silver medallist spot, occupying pole position in the contender lists for over two years now.
“In the last two-three years, everybody was hunting for me. If you beat me, you will be number one or number two and get my points,” he says.
Adegbuyi has won a record three Contender Tournaments in GLORY, but says his victories in the four-man competitions have not necessarily added up to the respect he feels he deserves.
“The last tournament I fought in, there were people sayig D’Anglo Marshall was the favorite. I stopped him in the first round!” he says.
“I thought, ‘What the hell is going on!?’ Everybody wants my place, so I have to keep it.”
First to face Adegbuyi on Saturday night will be Arkadiusz Wrzosek, a Polish warhorse who is making his GLORY debut in this competition.
“I’m planning to be the forward fighter. He seems like a humble and good guy, we’ll just leave it in the ring,” shrugs Adegbuyi when asked about his plans.
“Eight-man tournaments are always tough. You never know who gets injured or gets past the second round. If I’m the best man, I will also be in the final. No preferences [about who I face],” he says.
“It’s good for GLORY, it’s good for the sport, it’s good for the fans. It would be nice to do an eight-man tournament at the end of the every year.”
The winner of this weekend’s tournament gets $100,000 in prize money.
GLORY 62 ROTTERDAM 8-Man Grand Prix airs live this Saturday on ESPNews in the USA and on VERONICA in the Netherlands.