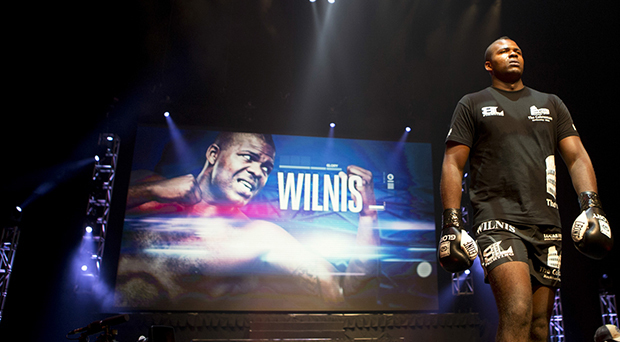 Brothers in arms: Wilnis duo on Aerts, brotherhood and GLORY 14

Fighters develop a lot of strong bonds on their journey from student to professional. Coaches, team-mates, sparring partners and corner-men come to occupy important places in their lives.

But these relationships are all secondary to the bond which unites Jahfarr and Jason Wilnis. Having grown up in the Dutch midlands city of Utrecht, the two brothers are now side by side in the trenches of professional kickboxing.

The GLORY World Series is the battleground and these two are brothers-in-arms, supporting each other every step of the way.

On Saturday the elder Jahfarr (22-3-1, 5 KO’s) fights a heavyweight battle on the GLORY SUPERFIGHT SERIES section of the card while light-heavyweight Jason (21-3-1, 6 KO’s) fights in the GLORY 14 Middleweight Contender Tournament.

They share a bond of love and friendship - though as head coach Danny de Vries points out, sometimes that love is of the tough variety.

“If you walked into my gym and saw these two sparring, you would never believe they were brothers, no way. You would think they hated each other,” says The Colosseum gym head coach, sitting alongside the brothers in the restaurant of the Hilton Doubletree in Zagreb.

Jahfarr agrees. “At our gym we want to kill each other in the ring. After training we are friends but when we are sparring there is only one goal and that is to win.

“And that includes my brother - if you saw us sparring you would think we hate each other. But I have got so much love for him, its only me doing everything I can to make him better.

“Honestly I think he is the strongest guy at 85kgs, middleweight. I don’t say that because he is my brother, I really mean it.

“I fight at heavyweight and I get hit with 10oz gloves. With him he wears 16oz gloves and I feel it more than I do in my fights. You will see in this tournament what he can do.

“The main change maybe is mentality - to go for it rather than waiting for the perfect moment. So its not just about looking for those KO shots because as long as I am hitting it I am getting points, the KO comes when it comes.”

Despite being in different weight classes and having a five-year age-gap between them, the Wilnis brothers are of one mind on many things. That includes trash-talk (“We don’t make noise before a fight. We do our talking in the ring.”) and a determination to put their home city on the map.

Dutch kickboxing is famous across the entire martial arts world but the scene has, historically, had an Amsterdam bias. The most venerable gyms - Vos, Chakuriki, Mejiro - are all to be found there, as well as newer powers such as Mike’s Gym.

Utrecht hasn’t previously been a city that international fans of kickboxing will have heard of. The Wilnis brothers are on a mission to change that.

“The gym is our second home and it is very important to us to represent it. We have wins over Amsterdam gyms, Rotterdam gyms. We are showing people that Utrecht has good fighters too,” says Jason.

“For me Utrecht is the best city in the Netherlands. I know Amsterdam and Rotterdam but Utrecht is the city for me. Its home, I grew up there, learned everything there, became who I am. I want to live and die in Utrecht, there’s nowhere else I want to be.”

De Vries is on the same mission; the Wilnis brothers are his soldiers. “When we opened our gym, these two were there from day one. When they first arrived they were training in soccer kit, now we have brought them to the GLORY level.

“And we’ve had fighters like Peter Aerts join up to do his training there. We are putting Utrecht on the map.”

Aerts’ addition to The Colosseum line-up came after the decorated veteran saw the brothers fighting on a show in Holland one weekend and was impressed with their conditioning.

“I come from another world, the military world and special forces. I have a different view of fitness to most guys. So Peter had seen our guys and was impressed with their fitness,” explains De Vries.

“He heard about how hard the training is at our gym, he wanted to try some training with us. He came down - he lives over an hour away - and he did one session.

“Afterwards he said, ‘What do you think, am I fit?’ I said, ‘By some standards maybe but in my opinion you’re not fit at all.’

“So then later, as he was driving home, he called me and asked if he could come back tomorrow. So from there we developed a friendship.

“And of course, I do not need to teach Peter Aerts anything about kickboxing. There is nothing for me to correct or to show him. My job is to make him fit and make him sharp, physically and mentally.”

Having Aerts in the gym has been a huge boost for the Wilnis brothers. At first they couldn’t believe that one of their fighting icons was now training with the, but it wasn’t long before they gelled. His expertise has proven invaluable to them as their own careers develop.

“I always looked up to Peter. When I was a little boy I saw him win the K-1 and now I train with him. And he is such a nice guy,” says Jason.

“When we train together we train technical, I like him and respect him a lot, I don’t want to go heavy with him.”

For Jahfarr it’s a little different. He went the same route but Aerts, a fellow heavyweight , wanted more pressure.

“When I first trained with him I was going very light and he said "hey, what are you doing? Come on man, put it on me,’” he laughs.

“He has been fighting for 29 years at the world level - I am 28 years old. He knows everything there is to know. He has helped us a lot, with training and tactics and plans. And he is a real gentleman, he is good for the sport. An ambassador.”

The brothers laugh simultaneously as memories of training with Aerts surface in their mind; apart from being a top fighter he is also a keen joker. The team say not one day has passed without Aerts creating laughter before and after training.

It will be all business on Saturday though. The brothers have a job to do and they get tense before each other’s fights.

“We get emotional when one of us is fighting. So if I see him take a shot or his hands are down I feel nervous for him. My heart starts to jump. I feel more nervous for his fights than for my own fights,” says Jason.

“When I’m fighting I know what I must do and I can do it. But when Jason is fighting it is out of my hands and I can only believe in him and know he is going to do the right thing. But there is more pain for me when he is fighting than when I am fighting,” says Jahfarr.

“Because he is my brother but also my best friend. When you are younger you have a lot of friends but when you really come down to it, people let you down.

“But with my brother, I know what I have. I can call him in the middle of the night and in five minutes he is at the door. Family is blood; it is truth.”

GLORY 14 ZAGREB takes place this Saturday, March 8. It will air in the US on SPIKE TV at 9pm ET / 8pm CT

Also on the card is the World Lightweight Title fight between Andy ‘The Machine’ Ristie (41-3-1, 21 KO’s) and Davit Kiria (21-9, 6 KO’s). The inaugural title fight will be contested over five rounds of three minutes but is likely to end well inside the distance.