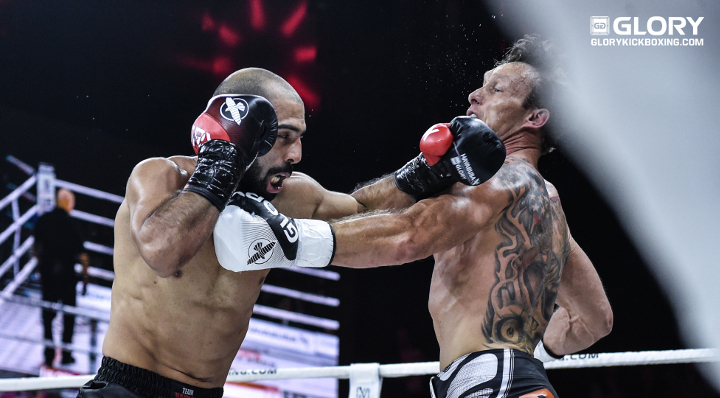 Houghton, looking heavyset having moved up from featherweight for this fight, went walking Gershon down as soon as the fight started, with Gershon edging backwards in front of him and picking shots off as he did so.

Gershon is a very crafty fighter. He moves well and is careful not to over-commit, but he also has knockout power and is capable of exploding at any moment and ending a fight with one of his trademark spin kicks.

But in the first round he contended himself with having a look at Houghton while staying safe. Measured, precise movement kept Gershon out of harm’s way while at the same time affording him opportunities to dart in and out. Though he fought on the back foot for the entirety of it, he clearly won the first round with clean striking.

The second round was closer. Gershon impressed with his clean setups and some spectacular spin kick attempts, but Houghton was able to find his range better in this round and he landed solid right hands more than once, with audible impact.

Gershon changed tack in the third round, discarding his cagey approach and going on the offensive. Early in the round Houghton was twice knocked backwards by surging left hooks as Gershon went looking to land definitive blows.

Houghton spent the round on the defensive. The two fighters reversed their roles from the first round, Gershon pressing forwards and Houghton moving backwards around the ring. Gershon looked to be chasing a finish when he rocked Houghton but the Colorado fighter was able to tie him up for long enough to clear his head.

An increasingly aggressive Gershon started fully man-handling Houghton in the clinches, throwing him to the canvas on two or three occasions, but it didn’t bring him any closer to a finish. Still, it was an accomplished second outing and he dominated on the way to a unanimous decision win.