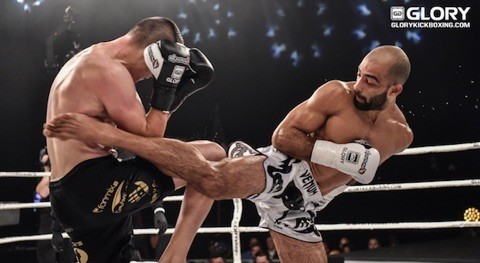 With both fighters making their debut in this fight, and in such an iconic setting, the pressure was high. Poland’s Rafal Dudek (20-12, 9 KO’s) is an experienced veteran and cited experience as his best advantage. Itay Gershon (14-4, 5 KO’s), fighting out of Israel, cited his own biggest advantage as athleticism and explosiveness.

Over the course of three rounds, it transpired that Gershon’s advantages would be the decisive ones. Dudek gave a skilled and accomplished performance but couldn’t match Gershon for power, nor for cleaner scoring opportunities.

The first round was very close, with little to choose between them. During the second round Gershon began finding more openings and in the third the heavier landed shots were almost all his.

Solid work was done by Gershon’s left kick throughout the bout, constantly giving Dudek something to think about on his right side and leaving a nasty purple welt there by fight’s end. His trademark spin kick was also deployed several times but Dudek did an excellent job of reading and side-stepping them.

Even though Gershon was moving backwards for most of the fight, he was the one doing the damage. More than once he landed big shots which drew loud appreciation from the Madison Square Garden crowd.

By the end of the third Gershon looked to have the fight in the bag. His impressive combination work and variety of output had him ahead on the scorecards and sure enough, the judges returned a unanimous decision in his favor, judging him the winner of all three rounds.