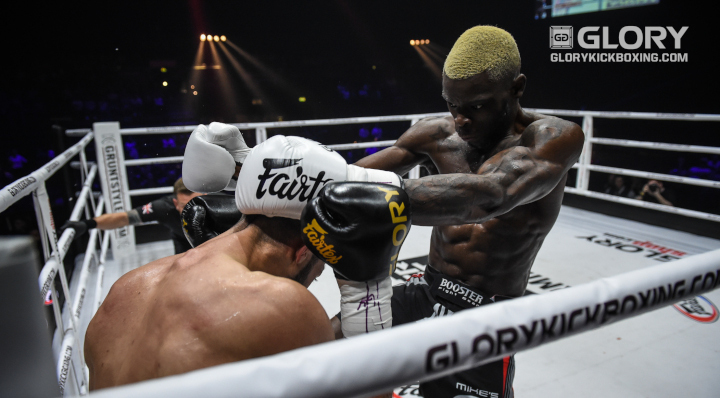 Tyjani ‘The Wonderboy’ Beztati (16-3, 6 KO’s) is annoying Chris ‘Bad News’ Baya (60-7-1, 35 KO’s) in the lead up to their GLORY 59 AMSTERDAM clash on Saturday night.
Dressed in a black tracksuit and accompanied by his coach Mike Passenier, Baya is sat at a long table in the boardroom of a high-end Amsterdam hotel.
Opposite him are members of the GLORY Kickboxing commentary and production team, holding their customary pre-fight meeting with the combatants.
Baya stares into space when he is asked if Beztati has gotten under his skin in some way, then nods slowly as his mind seizes upon exactly what it is that Beztati has done to annoy him.
“His confidence irritates me,” he says at last. “He’s too confident about this fight, he’s too cocky. I don’t think he realizes what he is in for. Do I sense a lack of respect in that, because he’s so confident? Sure, definitely.”
“But if he gets cocky in the fight and thinks he can trade with me, he’s going to be making a big mistake. Big mistake.”
Earlier that day, Beztati had been in the same room for his own meeting with the commentators. He gave a frank assessment of how he sees the pairing this Saturday.
“I think I have the advantage in range and technique, also I think I am the smarter fighter,” he said.
“The power advantage I would give to him of course, but that’s normal, he’s like 27, I am only 20, so of course he’s going to be more powerful,” ‘The Wonderboy’ shrugged, nonchalant.
“I just need to make sure I don’t give him the opportunities for those power shots.”
Beztati also drew comparisons between their respective performances against the lightweight champion Sitthichai. Baya challenged for the belt at GLORY 50 CHICAGO in February, Beztati at GLORY 53 LILLE.
Both lost unanimous decisions to the champions, but Beztati thinks he and Baya have different takeaways from their fights.
“I lost a decision but it doesn’t feel like a loss, you know? It’s hard to explain but even though I lost, it gave me so much confidence, my performance against Sitthichai,” says Beztati.
“But for Chris Baya, after one or two rounds he had nothing for Sitthichai and you could see that. So I don’t think that was good for his confidence.”
Baya doesn’t see it the same way.
“That Sitthichai fight woke me up! Did you see my next fight, against Josh Jauncey? That was a great performance, even though I lost a
bulls—t decision at the end of it,” he says.
“Who has Tyjani really fought? All my opponents have been top five, name guys. Apart from Sitthichai the only name you might recognize is Stoyan Koprivlenski, who is still kind of a new guy as well. And Stoyan beat him.
“So he’s not fought guys on the same level that I have, and I think you will see that difference on Saturday night. There will be no feeling out from me.
“I am looking to knock him out and I’m looking to do it from the opening bell. He will feel that and he will know what he’s let himself in for.”
GLORY 59 AMSTERDAM takes place this Saturday at the Johan Cruijff Arena in Amsterdam, Netherlands.
Heavyweight champion Rico ‘The King of Kickboxing’ Verhoeven is in the headline slot, defending his belt against Brazilian challenger Guto Inocente.