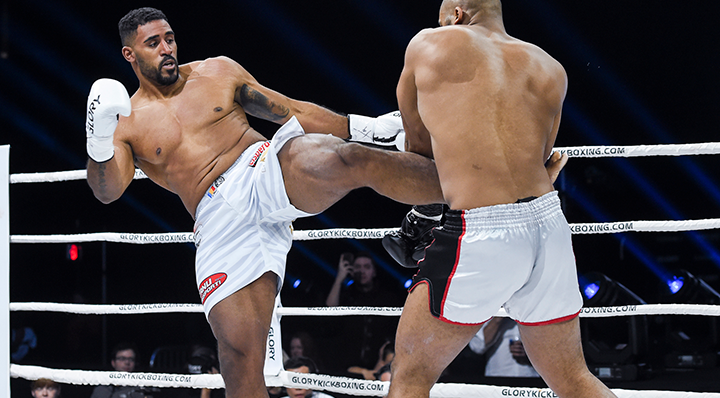 Adegbuyi too strong for Marshall in heavyweight rematch

It was a heavyweight showdown in the GLORY 71 co-main event in Chicago as Romania’s Benjamin Adegbuyi (34-6, 19 KO’s) rematched Curacao’s D'Angelo Marshall (20-5, 11 KO’s). The pair met previously at GLORY 50, with Adegbuyi scoring a first-round knockout.

Marshall threw with volume to start the fight. He backed Adegbuyi to the ropes with straight punches. The crowd chanted “Benny” as the Romanian stayed patient and kept his guard high.

Marshall remained aggressive, staying in boxing range. He wobbled the former title challenger in the corner with a series of right hands. A left hook from Adegbuyi backed up Marshall for a second. It was followed by a big uppercut that rocked Marshall.

A second uppercut from Adegbuyi sent Marshall crashing the mat, but he survived the count and the round expired.

Adegbuyi started round two with a head kick that just missed Marshall. Marshall rushed forward and ate another heavy uppercut. Adegbuyi ripped the body with a left hook and followed it with a body kick.

Marshall absorbed the heavy shots and landed a right uppercut of his own. Marshall fired combinations but he struggled to get through the defense of Adegbuyi. The pair traded kicks late in the frame.

A left hook from Marshall greeted Adegbuyi to open the final round. Adegbuyi responded with a right hand. The uppercut continued to be the weapon of choice for the Romanian fighter as Marshall frequently left an opening in his defense.

Marshall was the busier striker in the waning moments, but many of his punches were blocked by the former title challenger.

“It was not my best fight, but I’m happy with the win,” said Adegbuyi. “He gave me a hell of a fight. He deserves respect.

Watson-Smith went to work with his kicks, displaying a speed advantage. Lemaire closed the distance to neutralize the kicks and scored with knees in the clinch. A heavy low kick from Lemaire forced Watson-Smith to backpedal for a moment. A cut opened over the right eye of Lemaire. Watson-Smith increased his punching output, delivering a solid right hand. Lemaire plowed forward, finishing the round with power shots.

Lemaire bulldozed Watson-Smith into the corner to start the second round. He landed a heavy right straight that popped the head of Watson-Smith like a Pez dispenser. A low blow from Watson-Smith paused the action for brief moment. Watson-Smith scored with a counter knee to the body of Lemaire.

The French-born Lemaire kept up his constant pressure, forcing Watson-Smith to back up and eat punches. The referee warned Watson-Smith for holding as the round came to a close.

Watson-Smith attacked with kicks to start round three. An accidental headbutt prompted the doctor to inspect Lemaire’s nose, but the fight continued. Lemaire closed the distance to evade the kicks and delivered a heavy right hand. Lemaire bled badly from the clash of heads, but it didn’t slow his advance. He cracked Watson-Smith with a heavy right hand along the ropes.

Watson-Smith danced along the ropes late in the frame, absorbing a big knee from Lemaire. It was a clear-cut win for the France native Lemaire when the scorecards were read.

“I wanted a finish, but he comes from a Muay Thai background and we clinched,” said Lemaire. “I hurt my foot really badly, but I’m really excited for the win. That wasn’t my best performance, but I’m ready for the top five.”

Diedrick came out spamming his left head kick from the southpaw stance. He pressured Nelson with a high volume of kicks. The South African Nelson remained patient and looked to adapt to the stance switches from the Brit. Nelson backed up Diedrick with a straight right hand but was quickly answered by a knee from Diedrick. A flying knee from Nelson was blocked as the first round concluded.

Nelson turned up pressure at the start of round two. He scored with a combination, cracking Diedrick with a right hand. Diedrick continued to change stances and land with low kicks. Nelson was able to clinch and break the rhythm of Diedrick.

The confidence of Nelson was apparent as he opened up with his techniques. He looked for a spinning back kick and another flying knee. Diedrick clinched and peppered Nelson with short punches. Nelson chopped at the legs of Diedrick with low kicks.

More knees from Nelson were followed with punches and Diedrick backed to the ropes. A straight right from Nelson affected the balance of Diedrick, but he remained upright. They threw until the final bell, but the judges were called upon for a verdict.

It was a unanimous decision victory for Nelson, who got stronger as the fight progressed.