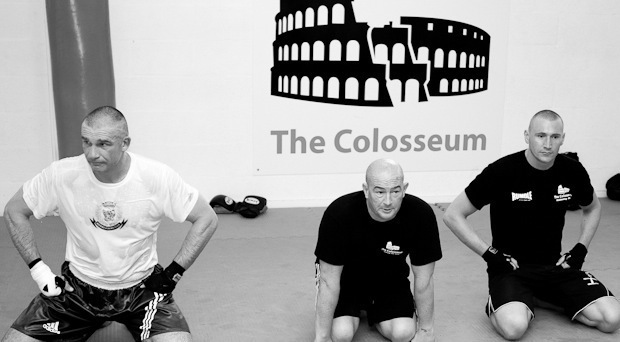 Gym of the Month: The Colosseum

Dutch Kickboxing is one of the world’s premier striking styles and the city of Amsterdam is its spiritual home. It is here that pioneer martial artists founded institutions such as Meijiro Gym and Chakuriki, laying the foundations for what would become the most exciting fightsport on the planet.

A small city called Breda, in the south of the Netherlands, was the only real challenger to Amsterdam’s dominance of the domestic scene. The legendary Ramon Dekkers came from Breda via Hemmers Gym. So too does Errol Zimmerman, who will take a shot at Rico Verhoeven’s GLORY World Heavyweight Championship title belt in February.

Hemmers Gym would later become the main training center for the Golden Glory team, a large squad which contained a lot of big names and which fought against the various Amsterdam teams in the Netherlands’ long-running north/south kickboxing rivalry.

The wheel of time turns and things change. Thom Harinck retired, effectively bringing the Chakuriki period to a close, and the power of the Amsterdam gyms has dwindled somewhat. At the same time, other teams have emerged and seek to stamp their own names on the sport. One such outfit is The Colosseum Gym in the midlands city of Utrecht, owned by Danny de Vries and Daan Kortland.

Utrecht was never considered a kickboxing hotbed during the height of the north/south rivalry; for the most part it was somewhere that fighters drove past on their way to bouts in Amsterdam or elsewhere. But in recent years The Colosseum has been quietly but steadily building its way towards becoming one of the countries premier training centers.

Two years ago, living legend Peter Aerts decided to make the gym his home, despite it being nearly a two-hour drive from his home. Head coach Danny de Vries, a military veteran, recalls how Aerts became a part of the team.

“Peter had seen our guys and was impressed with their fitness. He heard about how hard the training is at our gym, he wanted to try some training with us. He came down and he did one session,” he says.

“Afterwards he said, ‘What do you think, am I fit?’ I said, ‘By some standards maybe but in my opinion you’re not fit at all. I come from another world, the military world and special forces. I have a different view of fitness to most guys.

“So then later, as he was driving home, he called me and asked if he could come back tomorrow. So from there we developed a friendship. Of course, I do not need to teach Peter Aerts anything about kickboxing. There is nothing for me to correct or to show him. My job is to make him fit and make him sharp, physically and mentally.”

The Colosseum’s biggest homegrown successes have been the Wilnis brothers, Jahfar (22-5-1, 5 KO’s) and Jason (23-4-1, 6 KO’s). The former is a heavyweight and is the older of the two, while Jason fights at middleweight. Jahfarr went 3-0 on joining GLORY before suffering an unexpected loss at the hands of Croatian debutant Mladen Brestovac at GLORY 14 ZAGREB earlier this year.

“When we opened our gym, these two were there from day one. When they first arrived they were training in soccer kit, now we have brought them to the GLORY level… we are putting Utrecht on the map,” says De Vries.

The gym scored another big result recently when Jason Wilnis was able to beat Wayne Barrett in dominant fashion at GLORY 18: RETURN TO GLORY. Jason rode a two-fight losing streak into the fight (Artem Levin and a very narrow split-decision loss to Sahak Parparyan) and was faced with the prospect of losing his spot on the roster if he suffered a third consecutive loss.

He used that pressure as fuel. The team declared it to be his best training camp ever and that shone through in the fight; he threw his shots on full power for the duration of the fight and clearly had plenty of gas in the tank. Barrett rallied late in the fight but would have needed a KO to win. Sportingly, he was the first to commend Wilnis’ performance after the bout had concluded.

De Vries revealed afterwards that the team had a new policy of not allowing the two Wilnis brothers to be on the card. This is because Jason had been ringside in Zagreb when Jahfarr was knocked out by Brestovac, prior to his own fight with Parparyan. The two brothers are very close - both have said they feel worse watching each other fight than being in a fight themselves -  and De Vries says Jason was disturbed by seeing his brother KO’d.

Both brothers are well placed for strong campaigns in 2015 and the team has an air of one which is really clicking into gear. It has something of an open-door policy for its notoriously hard-hitting pro-sparring sessions and the aforementioned heavyweight champion Rico Verhoeven has recently been seen taking part.

Away from the professional side of the operation the gym is also a busy and successful one in the fitness and recreational training market. De Vries and Kortland say that one of their key objectives with the gym is to make kickboxing “more accessible for everyone - we make everyone feel at ease, from beginner to professional.”

The gym’s focus is on kickboxing but there are also some grappling classes on offer in the evening; members can get to grips with the art of jiu-jitsu. The gym is also fully kitted out with numerous punching bags, a boxing ring and a power-training area for weight-lifting and conditioning work.