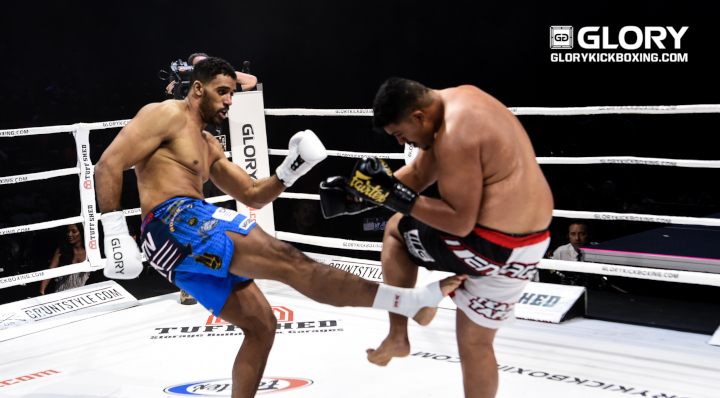 Standing 6’ 6” (1.98m) and weighing around 260 lb on fight day (118 kg), there is a lot of Benjamin Adegbuyi behind every strike he throws.
One shot he particularly likes is the low kick.
This technique is used to hammer the opponent’s thighs, taking away his mobility and, once the sciatic nerve, producing a level of sensitivity which can, with repeat blows, prove temporarily incapacitating and thereby end the fight.
GLORY opponents who have been taken out by Adegbuyi’s low kicks include Junior Tafa and Mladen Brestovac, but every opponent who has faced him has come away feeling their effect, even if their night was not ended by them.
“When your opponent is trying to give you a power punch, you wait on him and when he throws you move to the side and throw the low kick,” he explains. Watch him work that very tactic on Junior Tafa.
Adegbuyi is taking part in next month’s GLORY 62 ROTTERDAM 8-Man Heavyweight Grand Prix, which takes place Saturday, December 8 at the AHOY ARENA in Rotterdam, Netherlands.
Tickets are available here:  https://tickets.glorykickboxing.com/netherlands/e/glory-62?lang=nld