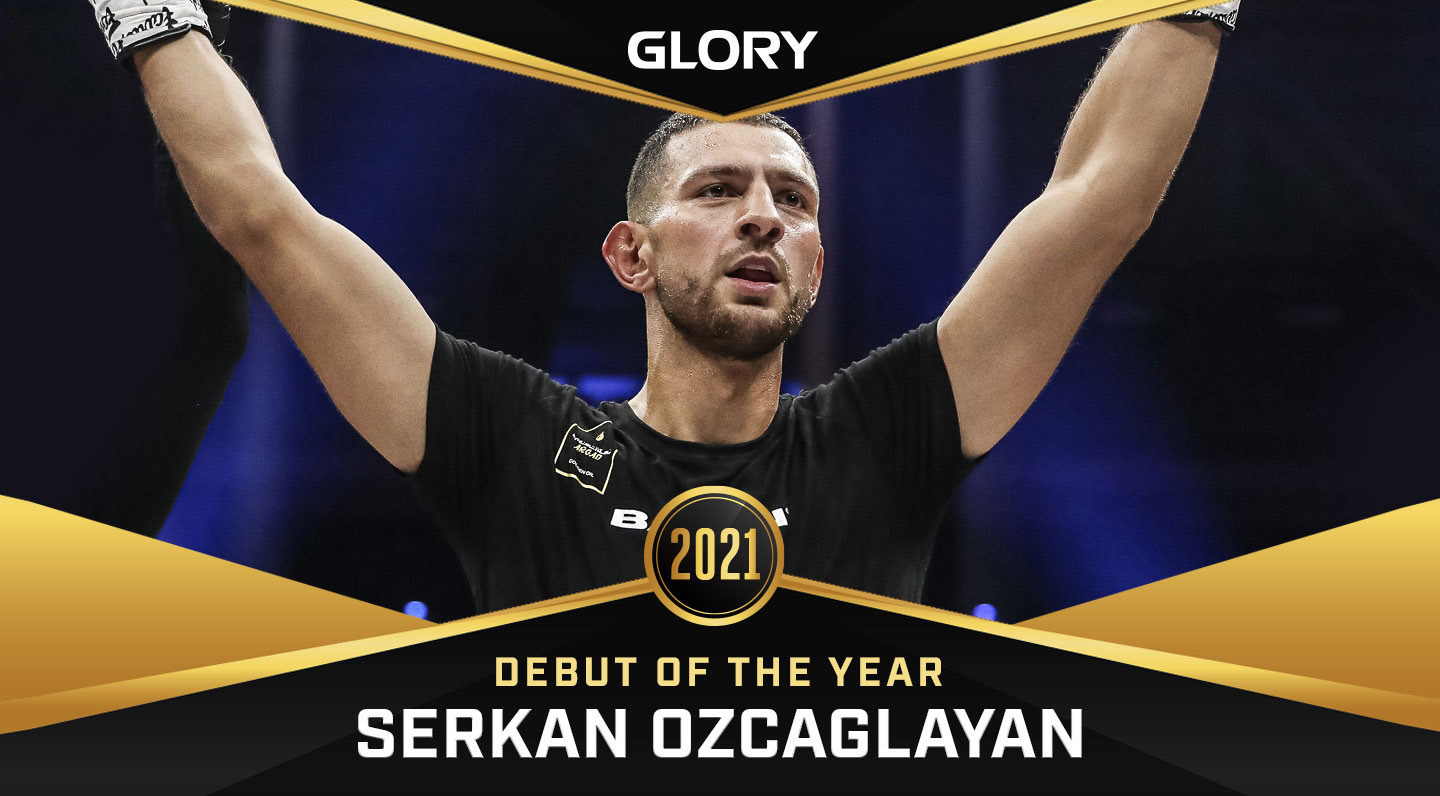 We met with the GLORY newcomer and winner of the 2021 Debut of the Year award, Serkan Ozcaglayan.

Where are you from and what are your roots?

I am Serkan Ozcaglayan, 27 years old and born and raised in The Hague. It’s my home. But I have Turkish origins, and I fight for the Turkish flag.

How would you describe yourself as a person?

I am a very happy guy, always laid back and I like to have a good laugh with everyone. But when it comes to kickboxing, I’m a prize fighter. Don’t try to take money away from me.

How did you get into kickboxing?

Back in the day, I played football for ADO Den Haag’s youth team as a left winger. Once, I dribbled past the goalkeeper and tried running into the empty goal, but the keeper pulled my shirt and I fell. I got up, slapped him and he fell unconscious. That’s when I realized I was much better with my hands than my legs! That's how everything started.

Who was your biggest inspiration when you started fighting?

I think Gökhan Saki. He is a fighter known for his explosiveness; he is a living legend. I also liked other fighters, but it was because of him that I started kickboxing. Later, I got to know more fighters: Ramon Dekkers, Ernesto Hoost, Peter Aerts, Jérôme Le Banner, all those K-1 guys were the best. They have inspired me.

You're Gökhan Saki's nephew; can you tell us exactly how you are related?

Where do you train?

I train with Said El Badaoui at SB Gym in Utrecht. I chose Said as a coach because I think he has a better understanding of kickboxing than other kickboxing trainers. We have a very good team there. I also work out with Hans Kroon at Fitnesscentrum Noord in Rotterdam. All my KO power comes from that physical training. Hans has trained Gökhan throughout his entire K-1 journey. He is very experienced in training kickboxers and knows what he is doing. 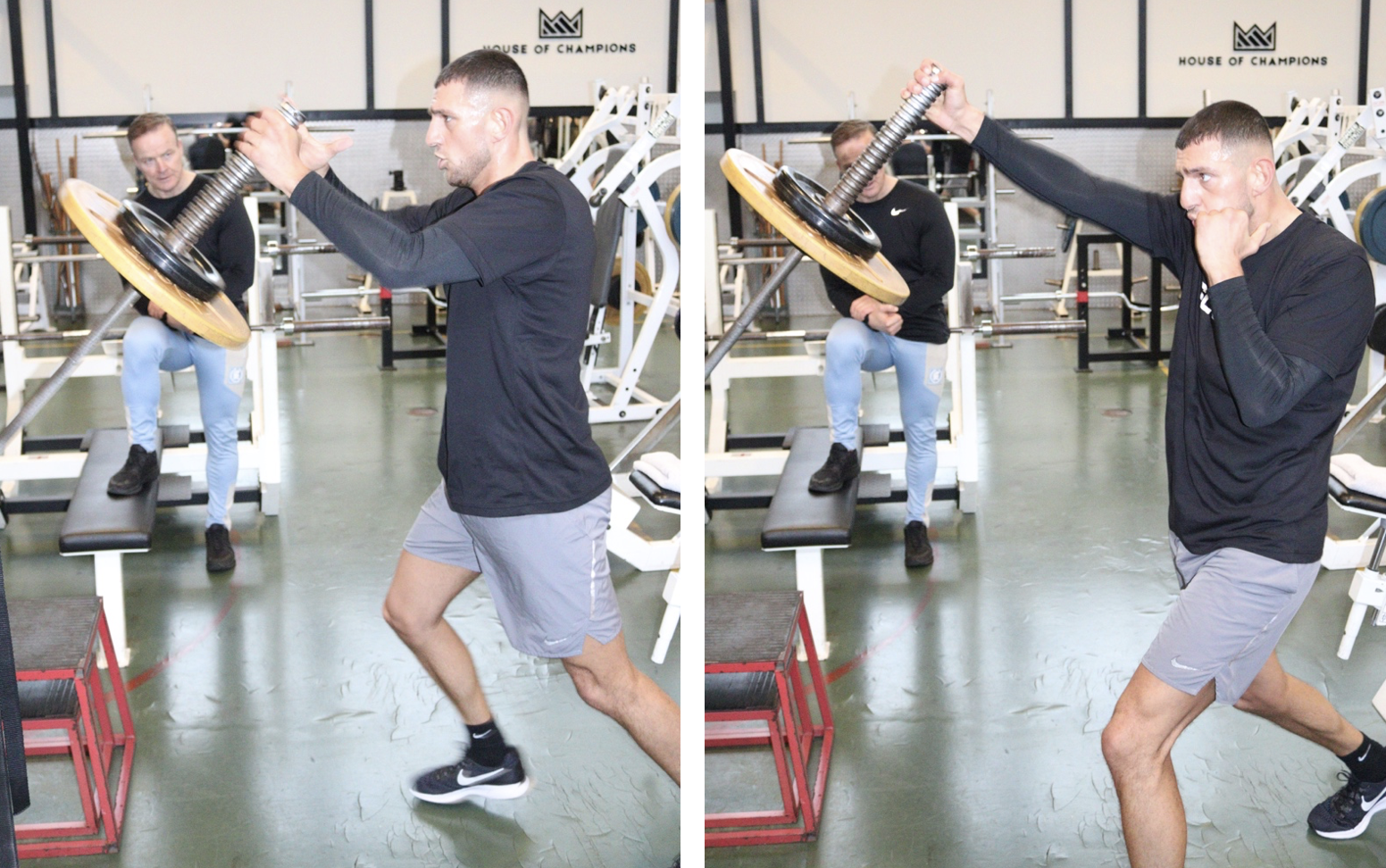 It has always been a special feeling for me. Of course, I have always looked up to Badr because he has fought fights that are not normal. I remember when I first met him, it was before his first fight against Rico. He was still training at Mike's Gym at the time. We were in the ring about to start sparring, we touched gloves and his entire face changed. I thought “shit, what am I doing here?”. He is also a true living legend and I have learned a lot of things from him.

What did Badr Hari teach you?

To have an overview of the ring, to create space. And the pounding of course, Badr Hari’s style.

How would you describe yourself as a fighter?

Very explosive. I started in the heavyweight division where I was already explosive, but I feel even more explosive now. People have had doubts about my move to the middleweight division, but I think I shut those doubts down last October 23. I'm a real knockout fighter, that's who I am.

What is your favorite weapon to use in the ring?

The left cross hook you saw for my debut in the GLORY ring. I have won against a lot of people with that move and that Matt Baker also got a taste of it. That's my favorite weapon, but it’s not my only weapon. I know that when I connect my combos, I put people to sleep.

Isn't it time to make the nickname "sleeping pills" official?

People have used it for years. Everyone who sees me yells 'Serkan, sleeping pills! Sleeping pills!' That's standard. That nickname is not a lie, it’s just a fact. Maybe we should make it official: sleeping pills! 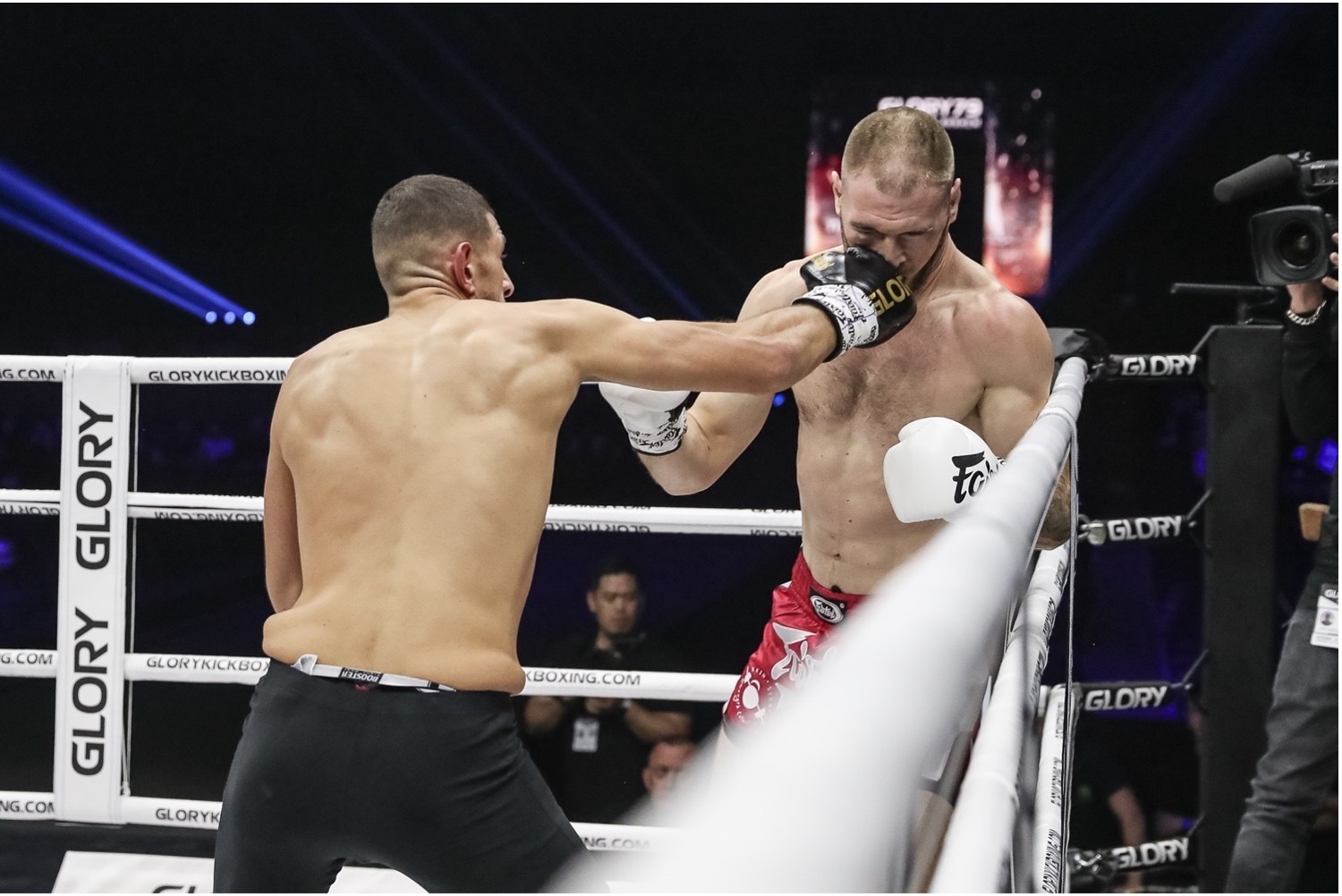 Serkan connecting one of his ‘sleeping pills’ at GLORY COLLISION 3.

I was very fat. I used to have a potbelly and saggy chest. When I turned proI still weighed 110 kilos (242 pounds). I realized it was time to start living like a true professional fighter. I became obsessed with losing weight and was able to get down to 85 kilos (187 pounds). I am now in the best shape of my life, sharper and fitter. As a heavyweight I could snack, now I can't snack anymore. My physical conditioning used to be an issue, but that is no longer the case. I just lost two or three bags of potatoes.

You have built up an impressive record as a heavyweight so fighting in that division wasn’t an issue, was it?

Correct. I knocked Levi Rigters down, but I lost that match on points because of my fitness level. I thought: “I will knock him out like the other ones”. They usually go down, but when he got back up, I couldn't breathe anymore. I'm sure if I had been in my current shape, I would have knocked Levi out in the first round.

How was your first fight as a middleweight?

It went really well. I feel very comfortable at this weight. I didn't expect the fight to end so quickly because I knew that Matt Baker was an experienced GLORY fighter and that he came to fight. But that left hook really did damage. During the fight, I was very sharp, and I anticipated everything he threw at me. If you watch that fight again, you'll see that I'm waiting to deliver that left hook, and I hit the bullseye. They also called me "blackjack" after that knockout because he went down on the 21st punch. That was fatal to him.

It certainly felt different from other fights. It might sound crazy, but I was a lot more nervous before my other fights. However, I just knew I was ready for that first GLORY fight. I had never prepared that well for a fight in my life. I wasn’t stressed at all. Everything went perfect and the knockout was the icing on the cake.

Do you want to fight in multiple weight classes?

It is the largest kickboxing organization in the world. I saw other organizations as a springboard to eventually end up with GLORY. When the offer came, I was sold right away. This is what I want, and this is what I have been working towards all these years. The best fighters in the world fight here. 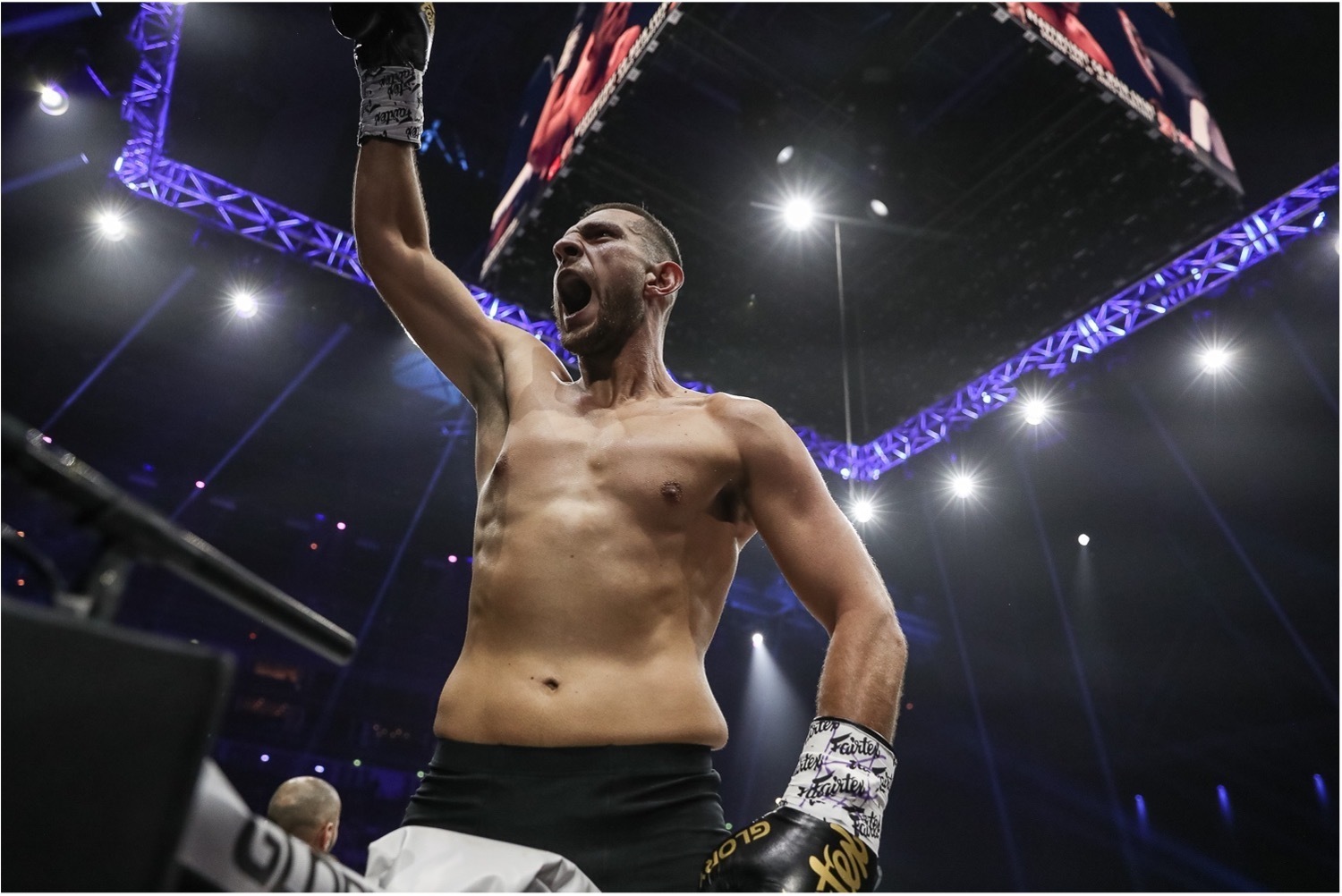 Serkan celebrating his first GLORY victory with the fans.

What's the difference between you and the other GLORY middleweights?

I'm a banger. I guess if you put all those guys together, you still won't have as many knockouts as I have in my reel. I'm going to get them all out of the way. They're all complete fighters, only I'm going to make a difference by pounding and punching through them. And they know it, they know where the danger in the division is coming from now.

How does a fight between you and champion Donovan Wisse end?

A week after my fight, I was tagged in a post that said: 'I'm the middleweight king, bow to the king!'. Donovan Wisse sees himself as the champion, he wants to make a statement. I think he's under a bit of pressure because I started with a huge knockout and all eyes are on me. I come in ranked #4 and it was my very first fight. I bow only to my god Allah and to no one else. I'm going to knock Donovan out and I'm going to knock the whole division out. People will see who the real king in the middleweight division is.

Who do you want as your next opponent?

Who do you think should be awarded "Kickboxer of the Year"?

Looking at the fighters who have been nominated, I'm going for Hamicha. He is 100% the kickboxer of the year, he literally punches and kicks everyone out. Rico Verhoeven does too, he came back very well in his last fight. But I think Hamicha deserves the title as sportsman and fighter of the year.

What do you want to be reminded as at the end of your career?

If anyone says Serkan Ozcaglayan, they should know that that guy really knocked everyone out. That I knock the light out of their eyes and hurt people, that's how I should be remembered.

After his win against Badr Hari, Arek Wrzosek was honored in the stadium of ADO Den Haag. Is that a dream for you too?

I'm in the stands every weekend, I am a loyal fan. ADO is my club, so that would be a dream come true. Two weeks before my fight, I had to go to the front part of the stands and stand on a small stage where everyone cheered for me. The whole stand exploded, so the support is definitely there. After my fight they wanted to do it again, but new COVID measures were put in place, and it wasn’t possible. But I think there might be another small tribute coming up.

Do you have a message for the GLORY fans?

Be sure to keep an eye on me! I'm a new addition to the middleweight division who is going to make a big difference. I also want to send a lot of love to my supporters in Turkey. Beautiful things are coming!