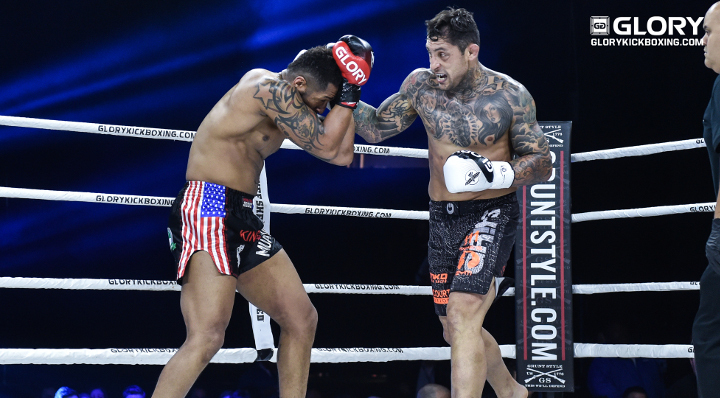 Thiago Silva is best-known to fight fans for his many UFC appearances, during which he demonstrated a ferocity and killer instinct which made him a huge hit.

Recently the Brazilian light-heavyweight made a connection with Mike Passenier, head coach at the eponymous Mike’s Gym in Amsterdam, Netherlands. While there to train for an MMA fight he became curious about fighting under kickboxing rules, which led to his signing with GLORY.

Facing Silva in his GLORY debut was John King of Amarillo, Texas. The former football player also has a background in MMA, albeit one neither as deep nor as distinguished as Silva’s. But the kickboxing ring was new territory for them both and the fight was wide open.

If King was expected to be star-struck he showed no sign of it. Silva came out with his trademark forward-pressure aggression and King met him head-on, leading right into a firefight. Heavy leather was traded back and forth with abandon.

Silva relishes these kind of fights and his experience of being involved in so many of them played to his advantage. King was game but definitely felt the heat at times, while Silva generally seemed to be in his element.

It wasn’t all Silva’s way though; far from it. King had not come to lie down and at times he seemed to be on the verge of making Silva take a lie down instead. His left body kick did fantastic work throughout the fight and Silva was feeling the ill effects of it by the third round.

All in all, both Silva and King acquitted themselves well in their GLORY debuts. Silva edged the fight by being a bit busier than King and being the one to push the pace of the fight, but on the back of today’s performance King will certainly get another chance to prove his merit.