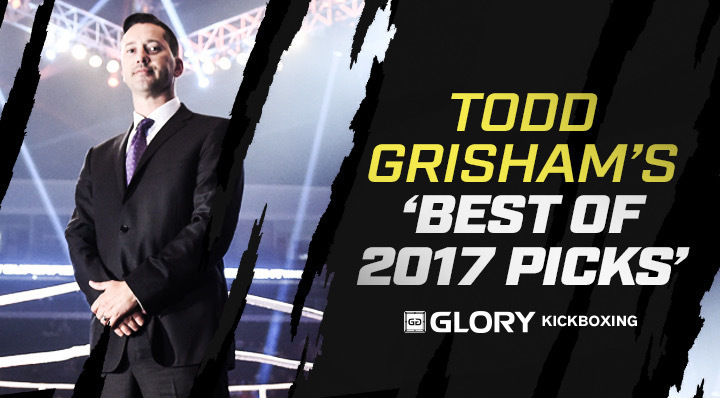 What a year 2017 has been for combat sports!
This year I had the honor of calling some of the greatest moments of the year: the the UFC ‘Fight of the Year’ between Justin Gaethje and Michael Johnson, one of the UFC’s ‘Knockout of the Year’ contenders by former GLORY champion Gokhan Saki and one of boxing’s ‘Knockout of the Year’ contenders by Mike Alvarado.
However, my most memorable highlights of 2017 happened in GLORY, my home organization. I have been very fortunate to have provided, alongside my broadcast partner ‘Bazooka’ Joseph Valtellini, the soundtrack to some of the most incredible moments in fight sports this year.
GLORY will soon be revealing its shortlists for the 2017 year-end awards. Because I’m so close to the action all year, fans ask all the time what my personal favorite picks are. So here they are!
Fight of the Year
For me it has to be Rico Verhoeven and Jamal Ben Saddik at GLORY REDEMPTION. A sold-out arena, two genuine rivals, a revenge element and the world heavyweight title on the line - what more could you ask for?
Verhoeven was in big trouble in the first round, probably the most trouble we have ever seen him in, in the GLORY ring. He came back from behind to fight his way into control of the fight and then finish it with a very vicious killer instinct we'd never seen in him before.
He silenced his doubters, avenged himself on Ben Saddik, ignited the crowd, provided a highlight-reel KO and almost made me lose my voice. Credit too to Jamal Ben Saddik, who put on a career-best performance.

I was also impressed with Kevin Vannonstrand. His tournament win over Mo Abdurahman at GLORY 42 NEW YORK was one of the most exciting performances of the year. His spinning backfist knockdown would have been the KO of the year if Abdurahman didn't get up.

Vannoustrand eventually got the TKO and advanced to the final to avenge himself against Giga Chikadze, the only man to have ever beaten him. Vannostrand claimed the Ramon Dekker Trophy and went on to capture the Interim Featherweight Championship in December.
Fighter of the Year
For me it’s Murthel Groenhart. He won four fights over the course of the year, all of them against opponents ranked in the top ten.
Groenhart started his year in Chicago with a savage stoppage win over ‘The Thai Terminator’ Thongchai and followed that with a win on home soil against Argentina’s Alan Scheinson.
He next went to Paris for a showdown with Harut Grigorian. The fight ended amid controversial scenes which went viral worldwide after Groenhart took out a retreating Grigorian with a (legal) looping punch from behind.
That win sent him forward for a welterweight title shot. He headed back to Chicago for a fight with Cedric Doumbe and took a decision win to take the welterweight title from the seemingly unbeatable Doumbe. Case closed.
Knockout of the Year
Picking a ‘Knockout of the Year’ for GLORY’s 2017 run is an incredibly tough prospect: the year was full of them. In fact there were so many that when making a shortlist, we ended up breaking them down into knockouts by way of punches and knockouts by way of kicks.
The best knockout punch of the year for me came from Anvar Boynazarov in his GLORY 47 LYON fight with Fabio Pinca.
Pinca and Boynazarov are both Muay Thai stylists and in fact Pinca is one of the best European Muay Thai fighters in the game. Boynazarov was the underdog but didn’t feel like one.
In pre-fight interviews he said he would catch Pinca and that when he did, “Pinca won’t be getting up”. In the fight itself Pinca was dominating Boynazarov but then in the second round he got caught mid-air by a Boynazarov left hook. Pinca's body went limp in mid air and bounced off the canvas like a basketball.

WOW! @anvar_muay delivers a HUGE knockout in the second round and advances to the featherweight tournament finals! #GLORY46 pic.twitter.com/Srr0nfVesz

The kick of the year for me is more difficult to decide. I can’t pick decide Croatian giant Mladen Brestovac’s stoppage of Hesdy Gerges and Petchpanomrung’s finish of Zakaria Zougarry.

Interestingly, both kicks came from southpaws via their trademark left leg strikes. Brestovac hit Gerges with a thunderous left head kick which knocked him clean out early in the first round at GLORY 41, Petchpanomrung cracked Zougarry with the same effect in the third round of their GLORY REDEMPTION clash.
Upset of the Year
There were some big upsets this year but the one which had the most impact for me was Elvis Gashi’s win over Josh Jauncey.
Gashi came in as an unknown local wild card for GLORY 43 NEW YORK - he lives in The Bronx - while Jauncey is ranked in the top ten. There was talk of Gashi being ‘in over his head’ and ‘thrown to the wolves’.
Neither prediction was true. What transpired was an electrifying performance that had the Madison Square Garden crowd on its feet in amazement as Gashi spectacularly knocked out Jauncey in one of my favorite fights of 2017.
That’s my picks for the best of 2017! Let us know yours on Twitter at @Glory_WS and @GrishamMMA, or on the GLORY Facebook page.