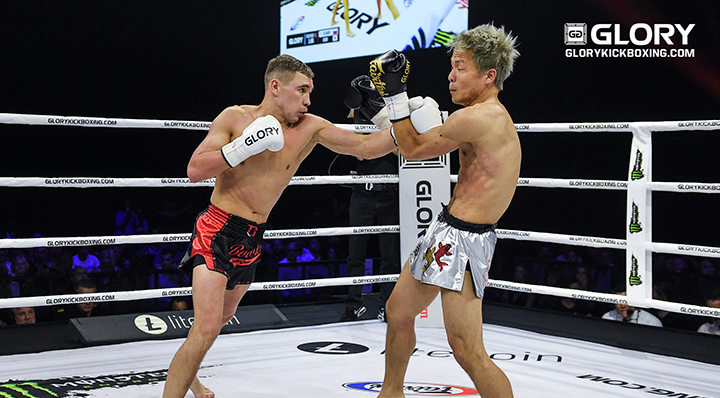 The pair traded low kicks to start the bout. Kubo landed a heavy kick that knocked out the legs of Ulianov.

The Russian responded with a heavy body kick that drew a reaction from the crowd. The referee warned Kubo for multiple infractions, but did not take any points. Ulianov landed a punching combination from the southpaw stance. Kubo tried to counter the boxing with more kicks, but his success faltered as the round closed.

Ulianov nearly took the head off of Kubo to open the second round. Kubo managed to evade significant damage from the head kick. Ulianov went back to the body with his next kick, slowing the advance of Kubo.

A red welt formed on under the left arm of Kubo from the kicks of Ulianov. Kubo’s output was reduced as Ulianov kept scoring with his kicks.

The confidence of Ulianov grew with every strike thrown in round three. He battered the body of Kubo with more kicks and followed with punching combinations. Kubo threw a head kick of his own that Ulianov was able to block.

Ulianov picked up the pace in the final minute, landing multiple kicks to the head of the Japanese fighter. A right hand from Ulianov stunned Kubo and the referee ruled a knockdown, much to the surprise of Kubo.

The fight would see the scorecards, but the late knockdown sealed the victory for Ulianov, who earned his third straight win inside the GLORY ring.