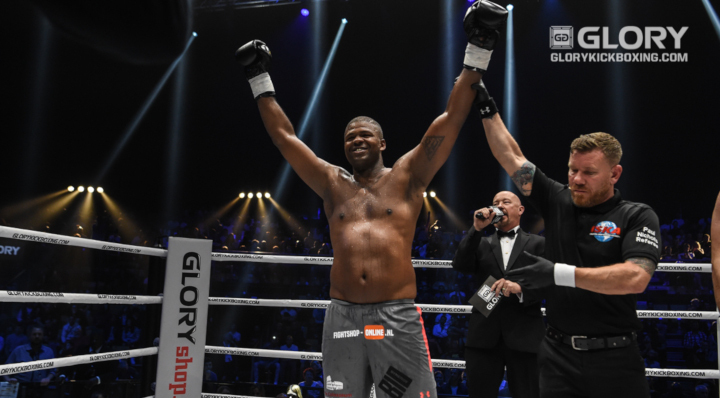 Ask Jahfarr Wilnis to choose one thing which will be the decisive factor tournament victory at next week’s Heavyweight Grand Prix in Rotterdam and you get one word in response:
“Pain.”
Other fighters have cited things such as luck and stamina, but Wilnis believes these to be secondary factors.
“Power, luck, conditioning - these things are all important. But pain is the number one thing, because an eight-man tournament is pain,” he explains.
“The question is, how much can you handle? Whoever can stand the most pain will win. And I think my pain tolerance is pretty high.”
Wilnis, who fights out of The Colosseum in Utrecht, Netherlands along with his middleweight brother Jason, has previously twice been runner-up in four-man GLORY Contender tournaments, but this is his first eight-man.
“The eight-man tournament is a big part of our sport’s history and I think that if you can fight and win three times in one night, then you can say you’re a real champion!” he says.
Of the other fighters in the tournament, Wilnis has two wins over Jamal Ben Saddik and two losses to Benjamin Adegbuyi. He has yet to face any of the other six participants.
“I think it’s Adegbuyi or me. We are the two most dangerous guys in the tournament I think. And I think me over him,” is Wilnis’ pick for tournament favorites.
“But right now I just want to fight. Whoever it is on the night, I don’t care. We will find out this Friday what the first matches are. I’m excited. I just wish it was now. The waiting is too long, you know? But I can’t wait.”
The GLORY 62 ROTTERDAM Heavyweight Grand Prix takes place next Saturday, December 8 at the Ahoy Arena in Rotterdam, Netherlands.
Tomorrow, Friday November 30, all eight tournament fighters will be in Amsterdam for a draw to determine the opening four fights of the Grand Prix.
Benjamin Adegbuyi, Jamal Ben Saddik, Jahfarr Wilnis and Guto Inocente are seeded, meaning they are already in their slots. At tomorrow’s draw they will find out who their quarter-final opponent will be.
In the draw are Junior Tafa, Tomas Mozny, Mohamed Abdallah and Polish newcomer Arkadiusz Wrzosek.