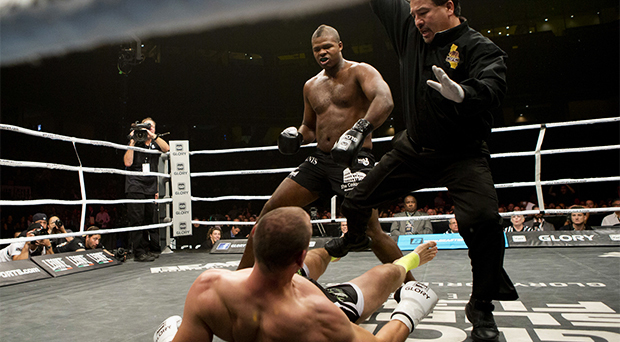 Wilnis ready for Brestovac: “May the best man win!”

Rising young heavyweight Jahfarr Wilnis (22-3-1, 5 KO’s) will have his next fight on Saturday, March 8 when he faces Mladen Brestovac as part of the GLORY SUPERFIGHT SERIES 14 card.

The 28-year-old is 3-0 in the GLORY World Series since his debut at GLORY 2 BRUSSELS and has scored back-to-back finishes in his last two fights.

The most recent being a devastating knockout of France’s Brice Guidon at GLORY 10 LOS ANGELES, a contender for Knockout of the Year 2013.

Brestovac is a local fighter, a winner of Muay Thai titles on the Croatian national level. He went 5-0 in 2013 and sees the Wilnis fight as a way to break out onto the world stage via GLORY.

It is going to be an interesting and hard-fought bout, as well as a classic clash of styles. It matches the kicker Brestovac with the puncher Wilnis.

“I know he is a tall guy and a unorthodox fighter, and I like that, because it’s a challenge,” says Wilnis.

“Brice Guidon was somewhat similar, he was tall and had a reputation for being a little unorthodox. But that fight was the best fight of my career so far.

“I won it with a big knockout, I was really happy with that. Also because the fight took place in the USA. It was always a dream of mine to fight there and to make my US debut with such a good KO was even better.”

Does Wilnis expect to score a KO against Brestovac? He shrugs; Wilnis is not one for boasting. “I don’t like to make predictions. We will see what happens - let the best man win,” he smiles.

Naturally because he is facing a Croatian in Croatia, Wilnis can expect to hear a few boos from the crowd as he makes his way to the ring. But if that does happen, he isn’t bothered.

“I’ve fought in Croatia before and I thought the fans were really good, the people were really nice,” he says.

“I’m looking forward to going back there. Naturally they are going to cheer their home fighter but they are fair fans and if I give them a good performance, I am sure I can win them over to my side!”

GLORY SUPERFIGHT SERIES bouts are the main means by which GLORY fighters earn the ranking points which will take them up the table and into contention for title shots and tournament slots.

Order the HD online pay-per-view of GLORY 14 for just $20 by clicking here.