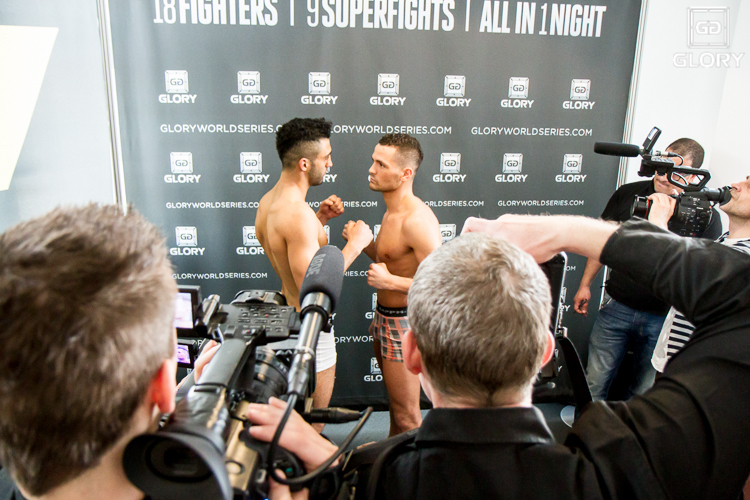 All fighters on weight for GLORY 7 Milan

Words have gone back and forth between the two in recent weeks, with the normally unflappable Petrosyan taking great offence at El Boustati describing him as “a rabbit who is scared of the fight.”

“I don’t know where he got this from,” snapped Petrosyan. “We will see on Saturday night who is running like a rabbit. He will eat his words.”

The staredown between co-main event fighters Robin van Roosmalen (28-5-0, 19 KO’s) and Murthel Groenhart (53-14-3, 29 KO’s) was intense, with neither wanting to break away first. GLORY officials separated them today but on Saturday night they will be let off the leash.

The two top lightweights headline Saturday night’s event in Milan, Italy with Petrosyan defending his world number one ranking and El Boustati looking to make a huge impact on his official GLORY debut.

Tense silence surrounded the staredown between heavyweight prospects Rico Verhoeven (38-9-0, 10 KO’s) and Jhonata Diniz (7-3-0, 4 KO’s), who had an outstanding performance against Daniel Ghita in the 2012 Heavyweight Grand Slam. With both being proven knockout artists and hotly tipped for big things in the future, this fight is unlikely to go the distance.

GLORY 7 MILAN will air in 162 countries and will be available to over 861 million television households around the world. The high-definition live stream is also available to every internet-connected device in the world via GloryWorldSeries.com, priced at just $20 USD.

The official weigh-in results for GLORY 7 MILAN are as follows:

GLORY World Series (www.gloryworldseries.com) is the world's premier kickboxing league, producing live events across the globe and offering up to $2 million in prize money to the winners of one-night, 16-man ‘Grand Slam’ tournaments and 8-man ‘Slam’ tournaments,  which are open to only the best fighters in each of six different weight classes. The fight series also includes events with traditional, single bouts.

With television deals spanning every continent, online live video streaming of all shows and the world's largest online martial arts library, GLORY is one of the world's most widely distributed sporting organizations.

Owned and operated by Glory Sports International (GSI), the organization has offices in the UK, Netherlands, Japan, Malaysia, Singapore and the US. Its personnel include an unprecedented mix of accomplished entrepreneurs and senior level executives from the diverse worlds of finance, sports marketing, television and martial arts fighting.

In 2013, GLORY launched the Road To GLORY tournament fight series to identify and develop new kickboxing talent in the United States, Japan and elsewhere around the globe into future champions and superstars of the sport.